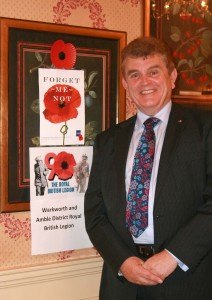 Many local businesses, branch members and friends of members contributed generous prizes for our raffle, so many we will be able to hold another raffle in the autumn. Thank you to The Co-op Garage Willowburn, Homebase, Amble businesses Lloyds Bank, Jaspers Café, Amble Development Trust, Tesco, Top Co-op, Harbour Fish Bar.  Warkworth businesses Cabosse, The Hermitage, The Greenhouse, The Jackdaw, Northumbrian Tartan, Greys Designer Jewellery, The Sun Hotel. A special thank you to Keith Thompson Solicitors, Amble for a gift that was auctioned separately and raised £70. Thanks were offered to Jeff Watson, Branch Treasurer who acted as M.C and auctioneer.

We raised the magnificent sum of £400 at the dinner which will go to the Royal British Legion Poppy Appeal 2011 and directly help the welfare needs of service personnel, including those returning from Afghanistan some as young as 18 yrs old.

The Chairman thanked Jeff Watson, Branch Treasurer who acted as M.C and auctioneer, June Watson Secretary for organising the event, and Joanne and Anthony at The Sun Hotel for a lovely meal and looking after us all so well.

A meeting on Thursday 15 Sept 2011 at The Sun Hotel, Warkworth 7.30pm
The Commonwealth War Graves Commission from Maidenhead, Surrey will give a Film Show and Talk on their work
Meeting open to public – Admittance  £4 which includes donation to CWGC
For further information contact Secretary  Tel  07785 753100