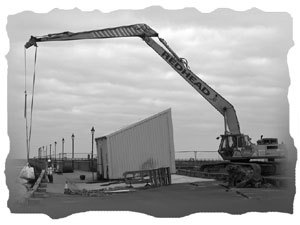 Warkworth Harbour Commissioners have identified funding to enable the construction of a new quay wall. Part of Amble’s quayside was seriously damaged in the floods of September 2008, resulting in the collapse of the harbour wall, with one section being fenced off as it was deemed too dangerous for public access.

“We are expecting to be successful with our grant application, which would allow us to  construct a new quay,” said a spokesman for the Harbour Commissioners. “The existing quay is not repairable, there’s nothing left there, it’s just a fascia.”

“It’s taken an enormous amount of time and effort, but we’re absoultely delighted that we’ve finally been able to find funding, which if we’re successful will allow us to rebuild Broomhill Quay. We are busy now applying fora Marine Management Organisation licence, which we need to complete the grant application.”

The money is being sought from the EFF (European Fisheries Fund) to cover half the repair costs which are estimated to be in the region of £550,000.

“The rest of the money is to be paid by Warkworth Harbour Commissioners, and we have been saving towards this” said the spokesman.

A previous grant application to the EFF’s Innovation Fund which had included projects in renewable energy was unsuccessful. If this application is given the green light, it is hoped that work may begin early next year.