Whither And Why: Oh no it isn’t

Whither And Why, with H.H. and Honk

From the desk of Gerald Honk

I recently attended an uproarious evening of festive theatrical revelry hosted by the fine folks of Warkworth Drama Group, by way of their winter pantomime, Rumpelstiltskin. During the performance, as I called “oh yes, it is” and vice versa, I was struck by the steeled toecap of memory, and as the abrasion of recollection began to make itself known, I realised I would have to pay a visit to my good friend, the vehement conversationalist and infamous inebriate, Sir Hilary Harrison-Nairn. 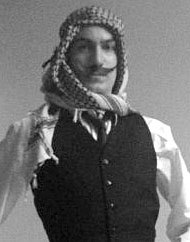 Pinging the doorbell of his modest dwelling adjacent to the Coquet, I awaited, with breath baited and reminiscence not yet sated. H.H. eventually answered his door (“Honk, chummy chum chum, what brings you here?”) and, removing my hat and topcoat, we adjourned to a side-room, where I stated the purpose of my unannounced passing-through.

It was clear my friend had been devouring Skittles again. The housekeeper put him to bed, and I busied myself with the latest issue of The Ambler until he awoke.

“My head feels like a punt in a thunderstorm… oh, good day, Honk…”

“Is this for another of those blasted web logs?”

“My dear H.H., we have only done the one to date, and it did go down rather well. Much like a glass of tokay would, in fact, go down at this point in time…”

My friend took the subtle hint and fetched the Hungarian dessert wine and, as it poured, I related to him my pantomimic anecdotes of earlier in the evening. My discourse brought me to the sudden remembrance it sparked of an impromptu one-man performance by H.H. at a gathering he hosted some Boxing Days ago. A glass or two later, I pressed him to relate to me the full romp. Happily, he obliged.

“First off, Honk, there was nothing impromptu about the thing. I had planned well in advance to get pickled beyond all recognition and behave like a dreadful bawd. It was the side effects of becoming insensible that were somewhat unexpected. Any route, this particular Boxing Day forms a part of the annual splurge that one puts on for the staff and their families. Others are invited to muck in and gorge too, but the day really belongs to the dear retainers. An associate of mine from over in Rothbury pops by to knock up some top grub, and a lady acquaintance with an eye for decor plushes up the dining room. This gives the serfs a proper day off, one wouldn’t wish them to work their own party.”

I have long since grown accustomed to Sir Hilary’s outdated terminology regarding his staff, but I feel I should assure you, dear reader, that he means no harm by it. Old H.H. is very fond of his staff, particularly given there are only two of them, and the latter of those only works on Saturdays. Chap just likes the word “serf”; one can only imagine the bafflement it must have caused when he holidayed on Australia’s famous Gold Coast.

“Seeing as I’m a frightful duffer at both cuisine and homely arrangements, I take it upon myself to construct a punch so potent it could end all wars! It tastes divine, can change a man’s personality and contains more spirits than a M.R. James story. I stumbled upon the recipe, I believe, during an exceedingly boring chemistry class when at James Calvert Spence College. Would that there was an award for Mixological Excellence, you’d be looking at the Nobel Laureate. 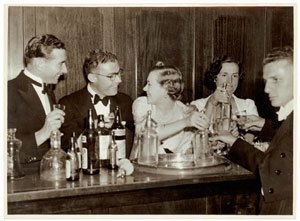 Constructing a punch so potent it could end all wars

“When forming this brew one, of course, partook greedily in sampling the stuff to ensure its qualities and ended up feeling so all-powerful I felt compelled to give a vigorous turn as every character possible in panto land. It began well, as you may recall, and my interpretation of Wishy Washy went down a storm. Trouble was my trousers saw fit to go down with similar alacrity and proved most shocking to the lady members of the audience, who caught sight of the famous Harrison-Nairn underbreeches, passed down through the family for eleven generations. I tell you, Honk, some of the rips are positively historic, look, this one dates back to the reign of William IV…”

I hastily sat my friend back down and implored him to re-zip his chinos. Clearly the effect of his e-number-fuelled binge had not yet worn off, so I endeavoured to continue. Noticing the acoustic guitar lurking in the corner of the room like a half-familiar cobweb, I asked H.H. if he had been learning to pluck this year’s Christmas Number One, as was his tradition. He nodded half-insensibly and muttered something about edible rainbows, but I pushed on, eventually hauling from him the tale of an infamous 2009 singalong of that year’s chart-topper by Rage Against The Machine.

“Thank goodness you had presence of mind to goose a gander at the lyrical content, eh, Honk? For the kiddies? I think “Leave me alone! I do not wish to carry out your instruction!” is far more palatable than whatever it was those transatlantic rabscallions were going on about, and further house points for arranging it so swiftly as a pleasant madrigal! I’d wager you could whittle the Horst Wessel Lied into a jazz number on the banjolele, or reforge Mascagni’s Intermezzo as the primer for ultra guttural ‘grindcore metal’. You really are hot footed in thought.”

I pshawed my friend. A common side-effect of his confectionary overindulgence was an uncharacteristic aptitude for the high praise of others.

“And you, Mrs. Clutterbutt” – he here indicated the housekeeper, who was scooping up the remains of a Japanese peace lily Sir Hilary had inadvertently smashed earlier in his jubilations – “you are a tremendous and fine woman, what! But Honk, my good pal, were it not for your actions… I, being odd of mental construction and, some would say, deaf to the idea of unuttered vulgarities, would have festooned the ears of all present with repeated full swings of the old swear club and sung that number as it was written. A lucky escape for all concerned, I wager! To quote the Great Man, Alfred Lord Tennyson, ‘Give me ten Gerald Honks, and I could rule the world!’

“Yes Honk, I’d have set a resolution to myself to be a more considered gentleman for this coming New Year if my calendar didn’t inform me it was already too late for such Bank Holiday promise-making. One isn’t a wholly abandoned throw-away fat head or ninny – I do have moments of sublime clarity. But dash it, Honk, one really wishes for a more common sensibility and appreciation of the simpler aspects of life, it’d do me the world of good methinks. Pass the Starburst, old lad?”

After hiding the aforementioned taste sensations out of my friend’s reach, I said my good-byes, perhaps less informed than when I had entered, but with ample material for my latest blog; the very blog your eyes currently feast upon! I began to amble towards Amble, where I had arranged to collect a pint of milk, and plonked Jeff Wayne’s Musical Version of The War Of The Worlds on to my portable music device. As the epic synths and Richard Burton’s dulcet tones caressed my inner prog-star, I perused my local listings for another pantomime to attend.

“Treasure Island in Alnwick?” I said to myself. “It’s a two-day ride, and H.H. does get rather carsick atop a pony, but this is the must-see event of January!”

This year’s Christmas number 1 was the Military Wives’ ‘Wherever You Are’, and is well worth a purchase. It’s for a good cause!

Treasure Island: the Pantomime is performed at Alnwick Playhouse from January 21 to January 28.

H.H. and Honk wish to indicate that they are sure the Chemistry lessons at James Calvert Spence College are anything but boring. They were never any good at Science, poor blokes.

H.H. and Honk also wish to indicate that Tennyson never said “Give me ten Gerald Honks, and I could rule the world!” nor any words to that effect. H.H. was never too hot on High Victorian Poetry, either.