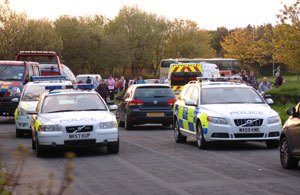 Police chased a Ford Focus into the Industrial Estate, then searched the Northumberland (Cheviot) Foods building

Drama unfolded on Sunday evening with a high speed car chase, the deployment of several police cars, dogs, the police helicopter and finally an arrest.

Local man Daniel Gurney described the car chase as he was heading south out of Amble: “The time was bang on 7pm, I was at the traffic lights at the Blue Bell when a car passed me at 80mph, followed by the police. They doubled back at the Jet garage and headed to Cheviot Foods, followed by five more police cars, a dog van, an ambulance and then the helicopter arrived.

“The dog van stopped by the roundabout and the helicopter stayed about 100ft over Cheviot Foods.  The car they were chasing was a grey Ford Focus. Its rear suspension was low, so I assumed it was full with passengers or carrying a heavy load. They weren’t hanging around, they overtook me and two others in front and had to avoid oncoming!” 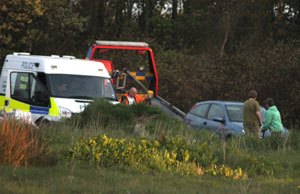 A grey Ford Focus was towed away by the Police

A crowd of between 80 -100 onlookers watched the subsequent police search of the Northumberland Foods – previously Cheviot Foods – building and surrounding area.

One eyewitness described the scene:  “There were loads of people watching. There was about six or seven police cars and the police and dogs were searching the building. The helicopter circled over the Middle School and the factory. Then they towed the car away. But at about 9 o’clock all the police left. I don’t think they found anyone.”

The Ambler understands that a male individual was later arrested.

The Ambler also understands that an earlier incident at the Slater’s Funfair on Friday night, where several individuals were involved in a brawl using baseball bats, is also connected to the incident on Sunday night.