I would like to express my sincerest thanks to everyone who contributed to my recent retirement.  I will sorely miss being involved with the medical care of patients at Coquet Medical Group and would like to wish you all the best of health and prosperity for the future.

As secretary of the Christmas Lights Committee, I would like to sincerely thank the Community for all their support. To our main sponsors Amble Town Council, The Tavern, Schooner Hotel and Quayside Chippie. To all the community groups, businesses and individuals who have supported us financially. Without your support there would be no lights.
A sincere thank you to Amble Development Trust for providing us with storage and a workshop.

Last but not least ‘our lads’, who work all year round repairing and renewing. A special thanks to Peter Stewart of Amble Skips and Geoff Singer who provide transport free of charge.

Thank you for a truly magnificent display.

Smoking — a point to ponder

We were clearing the area around the bus stand opposite St Cuthbert’s Church recently and discovered at least 250 –300 cigarette ends of varying lengths. It seems that whoever uses cigarettes has a habit of lighting up just as the bus arrives and then having a last gasp before throwing them down anywhere.

They could put them into the bin but that would mean walking back at least 10 ft and perhaps losing there place in the queue or they could place them in the small bin provided for cigarette ends a bit nearer the queue and not have so far to walk (of course the problem with this particular small bin is that it has a sign saying chewing gum so this may put people off).

A packet of cigarettes cost between £6.50 and £7.00 so each cigarette is about 35 pence, the amount thrown away is normally about half so this is around 15 pence. Multiply this by 300 (the numbers recovered) and you have £45 of waste. Now if this is an average over a week (and we will be monitoring the ends) then the sum is now £315, take away, that this may be seasonal and make an allowance for the fact that it may have been a really anti-social week then call the figure £200.

Wouldn’t it be interesting to get these people not to smoke that one cigarette at the bus stop and each put 10 pence in the bin. After a couple of weeks they will have paid for a part- time cleaner.

The outcome is that Amble would present a cleaner face to tourists and a job for someone, plus of course the anti-social types would be one cigarette healthier and be helping the community they are vandalizing? 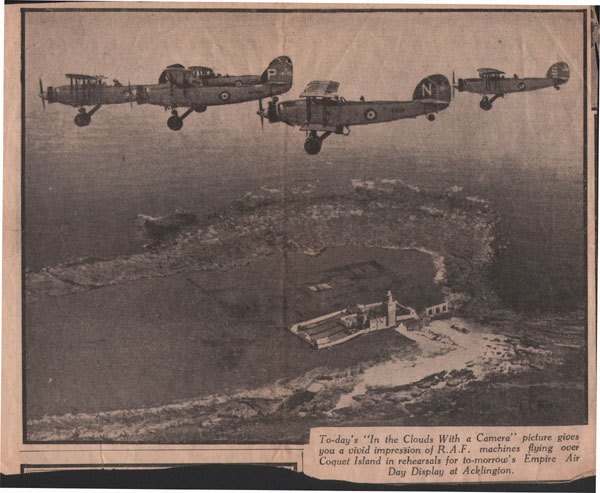 This cutting from a local newspaper was probably dated May 1938. Apart from the flying displays, it was exciting for young lads to go into huge aircraft hangers and to see what was done there.

The outstanding memory of the day, for me, was my first view of the Spitfire fighter; it flew low over the field, much faster than anything I had seen before. It turned, did a repeat run then flew north towards Scotland. Two years later of course, it played a major part in the Battle of Britain over the south coast and saved us from disaster.

In 1938, Acklington seemed to be a gunnery school – Swordfish aircraft pulled targets back and forth along Druridge Bay, just beyond Hauxley and all sorts of aircraft practised their shooting: Hawker Hinds, Wellesley and Harrow Bombers, Gloster Gladiators and Hawker Hurricanes.
George Young
Woodbine St, Amble

Amble Dovecote Baby and Toddler Group would like to thank the History Society, Peter’s Butchers, Harbour Co-op, Tesco, Premier, Young’s Newsagents, Yvonne Dryden, Shirley Mather, Judy and everyone who came for their contribution to our Easter raffle and all round help.

We are a voluntary organisation and do not get funding, so the money raised is very much appreciated. It will go towards the upkeep of the centre and a visit to Whitehouse Farm.

Thanks from Kathleen and Gary Callaghan.