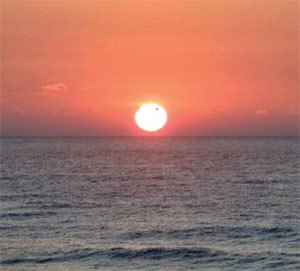 Simulation of Venus moving directly in front of the Sun. By Les Jannetta

On June 5th and 6th astronomers around the world will be training binoculars, telescopes and cameras on the Sun.  They’ll be hoping to witness an event that won’t be repeated in their lifetimes.

The planet Venus, which circles the Sun within the Earth’s orbit, will move directly between the Sun.
For more than six hours Venus will be seen by many around the world to be silhouetted against the brilliant solar disk.  Astronomers call this kind of event a transit.

The Sun, Venus and Earth are aligned every 584 days but the slight tilt of Venus’s orbit to ours means that transits only occur if they line up in early June or December.  As a result, transits occur in pairs with eight years between them.  Each pair of transits is separated by more than a century.

A bit of mathematics could calculate the Earth-Sun distance from those measurements.
The purpose of Captain James Cook’s first voyage to the Pacific was to obtain these timings.

Nowadays transits represent a nearby model of what happens to the light of a star when a planet passes in front of it: observations of the 2012 transit may provide clues for the many telescopes looking for planets around other stars.

The last Venus transit was visible from the UK in June 2004.

Although the weather was pretty poor we caught glimpses of Venus in front of the Sun through telescopes at Hauxley Nature Reserve.

Over the six hour duration of the transit the sky was clear enough to view it for only a few minutes!

On June 6th Venus will make another transit across the Sun – the last until the year 2117.  It will be best seen from countries around the Pacific Ocean.

So what are the viewing prospects for the UK?   The transit will be in progress at sunrise – about 4.28am in Northumberland.  A clear view of the northeast horizon is essential; a sea view is ideal.
This does of course mean there are plenty of good locations to view the transit from up and down the Northumberland coastline.  NASTRO will be meeting at the northern end of Druridge Bay to observe this event – see our website www.nastro.org.uk for details.

Venus will appear as a small dark circle against the brilliant Sun – as seen in the photo above.  Safe observation of the Sun requires specially filtered telescopes or binoculars.
Now for the obligatory warning: it may be possible to see Venus without optical aid just after sunrise but the Sun will rapidly brighten in the ensuing minutes.

It’s extremely dangerous to stare at the Sun – even when you think it’s comfortable to do so.  Venus will slowly drift towards the edge of the solar disk and this last in a lifetime transit will be over by 5.55am.

Further details and other astronomical events can be found on my blog: cosmicriver.wordpress.com.
Dr Adrian Jannetta FRAS