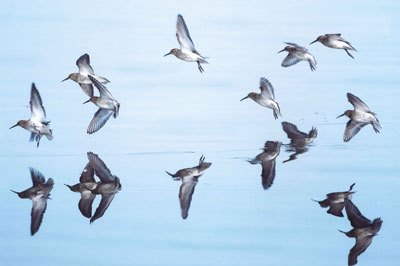 An amateur photographer and wildlife enthusiast from Amble has secured second place in the Adult Category of Northumberland Wildlife Trust’s annual photography competition with an image of dunlins reflected in the water – see right.

Tim Mason is no stranger to taking winning photographs, having been awarded third prize in the 2009 competition with a shot of a butterfly, taken at the Trust’s Hauxley reserve.  In 2011, he took second place with his fabulous photo of a stoat, partly in its seasonal ermine (white) coat peeping out of a rabbit hole again taken at the Hauxley site but in the wildlife charity’s latest competition, decided to enter his photograph of the dunlins.

Mike Pratt, Chief Executive of Northumberland Wildlife Trust and one of the judges said: “Every year it gets harder and harder as the standard of photography is exceptionally high so to have the second and third places in the same category going to residents of Amble is great; the photos taken reflect wildlife around the region and they are always a pleasure to judge.”

The Amble success doesn’t stop with photography as Ruth Hawkins  from the town was runner-up in the Trust’s wildlife film category with films shot at Hauxley and East Chevington nature reserves on Duridge Bay, near her home.

The Hauxley film concentrated on the antics of a family of 10 stoats as they played and hunted while her East Chevington film featured flocks of starlings as they swept in to roost.