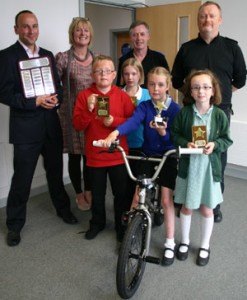 An Amble Links First School pupil has won the 2012 Amble and Warkworth Good Citizen’s award. Nine year old Ella Henderson was presented with a BMX bike and a trophy as well as a bag of goodies all donated by local businesses.

Four young people were nominated by the First Schools for their outstanding behaviour and attitude to friends, community and school.

Now in its third year, the Amble and Warkworth Good Citizens’ Award is the brainchild of CSO Darin Fawcett. He read out the reasons why the young people had been nominated, while Deputy Mayor Craig Weir presented the prizes. Neighbourhood Inspector Paul Truscott said “It gives me great pleasure to support this initiative to develop youngsters to be good citizens. The vast majority of young people are good and it’s our job to support them.”

Mum Carly said “I’m over the moon for her, really proud. We want to thank the police and all the businesses and everyone involved. And well done to all the other children nominated.

As has now become the tradition, the winner’s school was also presented with a trophy. Ella presented her Head Teacher Paul Healey with the plaque containing the names of previous winners. This is the second year the award winner has been from Amble Links School.

Insp Truscott said “This is a splendid event, well supported by the local community and Northumbria Police. Congratulations to all the young people involved.”

Coun. Weir said “I feel extremely humbled to be able to present the young people with these awards for their commitment to their communities. Long may it continue.”