What can you say?
The organisation known as Pride in Amble raised funds to make the town look good for the community by planting flowers around the town, especially making the entrances look attractive!

However over the last two weeks someone of an anti-social persuasion has stolen a planter from the roundabout at the Widdrington entrance on the A1068 and then had the audacity to return over this weekend and steal plants out of another planter which they then demolished and left in situ.

We have one left! Are you going to return? I believe the person/persons are quite strong as the planters are half round barrels and quite heavy, I see now why you demolished the second one, it made it easier to carry the plants away (good thinking)!  You must be invisible as nobody has seen you despite the police being aware? You must be desperate for money as the financial value is small, the aesthetic value however is great?

What did you do with them? If they are for your mum or spouse they will be so pleased at your kindness and generosity.
Anybody out there with any ideas?  It’s called Pride in Amble where’s yours??
Craig Weir     Chairman Pride in Amble

Thanks from Mayor
It has been a few weeks now since completing my two year term as Amble’s mayor and council chairman. It has been a great honour to have served the town and I thank one and all for the support and warm welcome wherever I went on council business or just meeting people in the street. Thanks to my fellow councillors for their help and understanding through some very difficult times during the last few months.

A natural burial area in the corner of the West Cemetery has been completed and is now open  This has taken over three years to complete and now gives Amble people more choice on what happens to them when they have passed on and easier for relatives not having to travel long distances for this type of internment.

The main highlight of the year was the coming together of the town’s people and various organisations to make the Diamond Jubilee such a success. This I hope will continue with other events (some already planned) into next year and afterwards. It just goes to show what Amble can achieve with the right enthusiasm and all groups and organisations working together
Leslie Bilboe    Amble Town Council

Congratulations to new Mayor
Belated congratulations to Amble’s new Mayor, and chairman of Amble’s Town Council, Ian Hinson.
I initially encountered Ian when he was a normal, boisterous kid but I did have to administer the odd reprimand when he got cheeky. Fortunately, Ian had caring parents who were also strict disciplinarians. His father, Archie, was the leader of the Boys’ Brigade for many years.

Ian has consistently devoted much of his adult life to the interests of the Amble district and the local people but lack of funding has always been a stumbling block which has inevitably impacted his positive thinking and planning. Nevertheless, the people of Amble can now rest assured they are in the capable and safe hands of the new mayor and leading councilor, Ian Hinson.
Ray King  Bangkok Thailand  via email 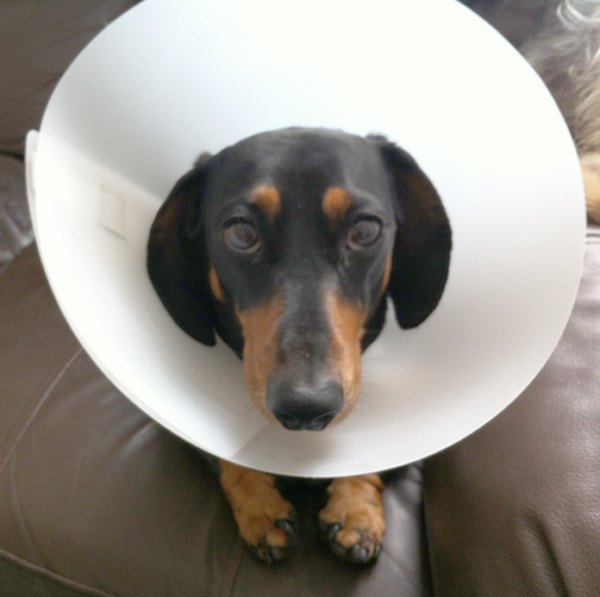 Cailean had to have immediate surgery

On Tuesday 17 July, I was walking my dog Cailean around the pier in Amble, and heard him grab something in his mouth. Imagine my panic when I opened his mouth and I saw the end of a fish hook, which he quickly swallowed before I could get it out.

I took him to the vet, and he was X-rayed. The fish hook he had swallowed was approx 2 inches long with a barbed end, and luckily hadn’t punctured or shredded anything on the way down. The hook had to be surgically removed.
Cailean is recovering well, though he has to eat special food that’s light on his stomach, is on a course of antibiotics, and has a large wound on his stomach. I now have a hefty vet bill.

All this is because someone was either careless or just couldn’t be bothered to pick up their hook after they’d finished fishing. It’s not the first time I’ve seen fish hooks left on the pier, and I quite often see discarded fishing line tangled on the sides of the pier.

I write this letter, not to complain, but to urge fishermen to be responsible. When you cut off a hook, put it somewhere safe and take it with you. Please, when you’re picking up your fishing equipment, look around to see if you’ve left anything.
Thank you.
Justin Cooper.  Broomhill Street, Amble.

Amble Sword Dance at the Sage
A few years ago Anne Flanaghan sent in a piece and a picture of the old Amble Sword Dance.
I have recently written and published a book on the Rapper sword dance, the miner’s dance of Northumberland and Durham and the Amble team feature in it.
There will be a performance of the Amble Sword Dance, last seen before the Second World War, at the Sage in Gateshead on Saturday October 6.
Phil Heaton   English Folk Dance and Song Society

Message in a bottle
Whilst on holiday in Amble the first week of July (from Muirhead, a small village outside Dundee on the East coast Scotland) my two kids Cara age 9 and Blair age 6 and their Grandad Eddie were beach combing on the beach at Amble (just below Cliff House?) and found a message in a bottle.
The kids opened it and found it was from two girls from Warkworth, Sarah and Molly who had put it in the River Coquet at Black Bridge on 13th Mar 2010
We thought it would be nice to let the girls know it had been found.
Many thanks
Karen Hockley  via email

National Service Exploits
Two years ago you were kind enough to publish my letter requesting your readers to contact me if they had any interesting National Service stories which they would like including in my forthcoming book entitled ‘National Service Exploits.’
I had a good response from them and the book has now been published.
It contains 121 stories and photos in 392 pages. It gives the experiences of 18 to 21-year old National Servicemen between 1945 and 1963, involving 30 Regiments in 30 countries in all three Services. Some of the stories are humorous, some dramatic, but all very readable, and the book is selling at £12.95, plus packaging and postage.
It can be obtained from me by telephoning 01642 274261. Thank you.
Brian Davison
Kirkdale Way, Acklam Hall, Middlesbrough

Lost contact with friends
I lost a friend I used to know, Helen Paterson, 18 Wellwood Street, Amble.  I live in Stoke now and would love to get in touch again with her. That was her maiden name then. Thank you. She would be about 63 now.
Peter Burdon
peterburdon9@gmail.com

Such caring people
I would like to thank the kind people who helped me out on two separate occasions.
Firstly I missed the bus to Morpeth when I was meeting a friend. He has not been well and gets panicky when things don’t go to plan, so I was distressed because I did not know what to do. As I walked onto Queen Street I related my story to a gentleman in the Co-op car park. He was shopping with his wife, but offered to drive me to Morpeth. He had a black Mercedes car. Thankfully I arrived before the bus and my friend was unaware there had been a problem.

Secondly was when we had the floods. My trip to Gosforth was cut short by the weather. I was anxious to get home to tend to my cat. At the Regent Centre the bus services were in chaos, I managed to get to Morpeth. but there were no buses to Amble, however a Widdrington bus came in, and another lady Pat rang her husband Steve to collect her and take her to Hadston, and Steve kindly drove me home.

It’s good to know that there are such caring people around, who are willing to help others out.
Mrs. Watson,
West Court, Amble