Your letters and emails: Oct/Nov 2012 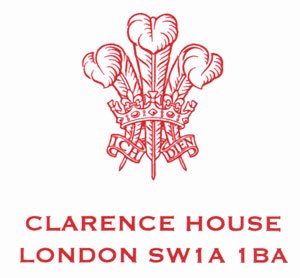 Thank you so much for sending me the latest copy of The Ambler, which I have passed on to His Royal Highness, as requested.  I’m sure he will be very interested to see it.

The Prince was thrilled by the warmth of the reception he received in Amble and throughout Northumberland, and he, like all us all, has very fond memories of his visit.  I’m glad you enjoyed it as much as we did!

The station received many donations and a large variety of cakes which made a significant contribution for us.  I would like to take this opportunity to thank everyone for their donations.

My thanks also to the Amble Lifeboat Fundraisers, volunteers and individuals who worked so hard on the various stalls. We certainly could not manage without these people giving freely of their time.

My thanks to the crew of the Amble lifeboat who held two exercises in the harbour, the crew of the Sea King from RAF Boulmer and HM Coastguard.  Although many will believe that we held a third exercise, one was a real call out to provide a tow to a yacht that had run aground entering the harbour. This did at least provide another opportunity to see the lifeboats in action.

During the day we had live music from Newcastle All Stars Steel Band and a young Amble group called Otterhound.  Our thanks to both.

The total money raised was almost £8,000.  This is a tremendous amount and testament to the generosity of everyone who came along.  To everyone a sincere thank you.

Thank you to all those who visited N&F Young to join me in a party to mark my retirement. I really appreciated the kind words, good wishes, cards and presents.It was good to meet friends I’ve made while trying to advise on colours, paint and wallpaper. 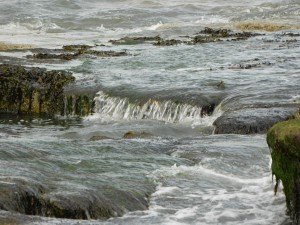 This photo of waves over rocks was taken near the Little Shore by new Amble resident Dan Tait.

Teen taunted for tidying up

This Wednesday, at the Quayside Chippy in Amble, I found myself in a very puzzling incident.

I was out with my friends and they were all having their tea down by the harbour, some had chips from the Harbour Chippy and some just a pasty from Tescos. I decided to perform my good deed of the day, collected up their rubbish and headed towards the nearest bin (I find Amble lacking in these objects) inside the Quayside Chippy.

I stepped inside the deserted chippy and dropped the rubbish in the bin (which may I add had plenty of space for it). I was just about to leave when an employee says, “Excuse me? Is that rubbish from this shop?”

I turned around, and said very confusedly to the employee and the others with her, “Erm… No? Does it matter?”

She says, “Yes actually, it does. That isn’t a public bin, so you can’t put your litter in it unless it’s OUR litter.”

I say, now utterly befuddled, “What?”

Now speaking to me like I’m mentally challenged, emphasizing each word, she says, ” You. Can’t. Put. Your. Rubbish. In. Our. Bin. Sorry, but you’re gonna have to take it else where.”

At a loss for words, but I say, “Well… If you say so…” and unhappily stick my hand in the bin and pull out the armful of rubbish. Gross.

The worst is yet to come. I’ve not even shut the door of the chippy behind me and I hear them start to laugh hysterically. I hear the employee who spoke say, “Ahahaha! Did you see her face?! Ahahahah! Ohmygod her face when I told her to take it out! Ahahaha!”

…I and my friends still cannot believe what happened.

The amount of beach litter pick-ups taken place in Amble… The amount of times I’ve been told I must never litter, it’s just laziness, make an effort to pick it up and bin it… The amount of signs that say ‘Pick Up Your Litter!” or ‘Do Not Litter’… How hypocritical can you be chippy?!

All I wanted to do was help my home town stop litter and do the right thing. No wonder there’s so much litter on the floor outside the chippy! This must have happened to others so they’ve just dumped it outside the place, and next time dumped it somewhere else in Amble! I can only hope they haven’t scared away any tourists treating them the way they treated me, because if they have, then I’m terribly embarrassed for Amble.

As you can probably tell I’m unimpressed…

My regards, a disgruntled thirteen-year-old.

In previous issues, we have asked readers for their parking stories. After two parking fines in one week, Elsie Dixon, manager of Rochell House on Queen Street wrote to Northumberland County Council Highways Department. Rochell House is a residential care home for people with learning difficulties. Here is an extract from her letter.

Rochell House has been established since 1993, throughout the 19 years there has only been one occasion where it was necessary to contact the appropriate department to explain the present situation.

For 19 years we have been allowed to park whatever Mini Bus we were using. It has always been parked directly outside our front door. This allows each resident to alight from the bus without the risk of  falls. A small number of residents need the support of a carer until they reach the mini bus. If they had to walk longer distances to wherever the mini bus was parked they would need to transfer into a wheel chair, only then to reverse the procedure once they reached the mini bus.

My main concern leads to the important issue of emergencies which could involve the need to accompany a resident to hospital. It has been very reassuring knowing that transport is nearby and we have easy access to it.

I totally appreciate there is a car park at the bottom of Queen Street. However due to the size of our mini bus as well as the lack of disabled parking within the car park, this has created problems in the past when we  have needed to look for alternative spaces.

Directly opposite Rochell house there is a Tesco Store, alongside the path there is no single yellow line, and therefore parking is allowed. However any time we needed to park there and residents needed to leave Rochell House, traffic had to be stopped to accommodate the time it took for carers to support the residents accross the road.

I, staff and residents would greatly appreciate your support by addressing the issues I have explained and look for a way our concerns can be solved.

I am responding to your in article in The Ambler about parking. I popped into the     Co op last week for some essentials at about 4.30pm, I parked outside Zecca because there was nowhere else to park,and  when I came out five minutes later I had a ticket.

As a resident of Amble for the last 25 years I have always tried to support local business as much as possible, but I can’t afford a £35 parking ticket when I go shopping, so I will be spending my money elsewhere in future. I can park for free in Alnwick, Ashington, Blyth, Cramlington, The Metro Centre etc etc.

I have always shopped on Queen Street at least twice a week but recently the warden chastised me for parking in a loading bay (something I have done since moving to Amble 4 years ago). I now go to Hadston as there is always ample parking and has the essential shops I need. Amble’s loss is Hadston’s gain.

Wet ‘n Wild in Hauxley, but the show went on! 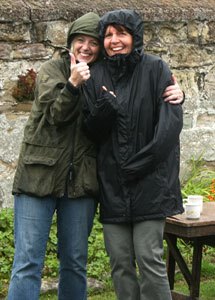 As the Sunday had been warm and sunny the team were able to set up during the afternoon with extra sand bags to hold down the gazebos and some tight knots on the bunting. August Bank Holiday Monday was rather cool to start with so we decided to cancel the Bouncy Castle, and with the kind permission of the chapel elders, we were able to move the bric-a-brac stall and local artists into the chapel. We also decided to start an hour earlier in a bid to beat the rain.

However, our supporters didn’t let us down and there was a good crowd. They enjoyed the main attractions, bric-a-brac, tombola and money tombola, and our clairvoyant. The band got the music going and once the BBQ started selling our famous pork sandwiches (with Roland’s pork and the Farm Shop buns) custom at the bar quickly picked up. Despite the cold wind Anna’s face painting still attracted lots of youngsters.

Unfortunately the rain came early which meant tea, coffee and cake in the village hall became very popular and the hall was soon crowded. The bric-a-brac in the chapel was doing a roaring trade and not just because of the weather. Outside we tried to keep the plate smashing and coconut shy going but the weather was getting worse and even the “hammer man” had to call it a day..

The pet show had a sheltered corner in the square and there was a very good turn out of pets, the Hauxley supreme champion being a Lurcher cross.

After a brief musical interlude the band decided to leave, so we drew the raffle early and made a few local people very happy with some great prizes. We are very grateful to the following local businesses for their support with prizes: JK Crafts, Spurelli, Pier 81 (The Tavern), Co-op, J&J Seafood, Zecca, Rolands Butcher, 42 Queen Street, Lawrence’s, and The Farm Bakery.

Inevitably we had to close early but we are very grateful to all those people who turned up and supported the event. We have not been rained off in more than 50 years and with your help we managed to continue the tradition for another year. Let’s hope next year the weather is kinder, we will be here with all the usual attractions and we look forward to seeing you all again.