In memory of gardener Jim 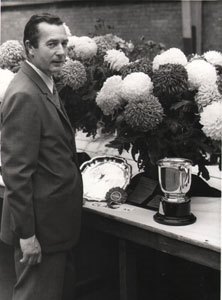 A new trophy was presented at the Warkworth Flower Show in memory of Jim Shepherd. Jim was well known in the gardening and show world having been an exhibitor and judge in Amble, Alnwick and a number of village shows around the area. As a gardener, he grew everything from flowers to vegetables, but chrysanthemums were his favourite, and the new trophy was given by his family for chrysanthemum. It was won by P. Cairns. At the presentation, chairman Chris Howliston said “Jim is a great loss to the gardening community.”

The town garden competition was instigated in the 1970s by Jim and then Councillor Charles Turnbull and Jim were judges until 2003.

He was born in Broomhill and later lived in Amble. His grandfather introduced him to gardening when he was six and he never looked back. He was a third generation Leek Show judge at Alnwick, Warkworth, Amble, Wooler and Glendale shows.

He served in the Royal Engineers from 1944 to 1947. On leaving the forces he began working for Reavell and Cahill architects where he gained his Royal Institute of Chartered Surveyors (A.R.I.C.S.) degree. He was employed there for more than 40 years.

Jim also had an interest in local history and at some point over the years held all the key offices in the East Coquetdale Local History Society. He died in June, aged 86, leaving his wife Joan.