Parking enforcement is a disaster for the town 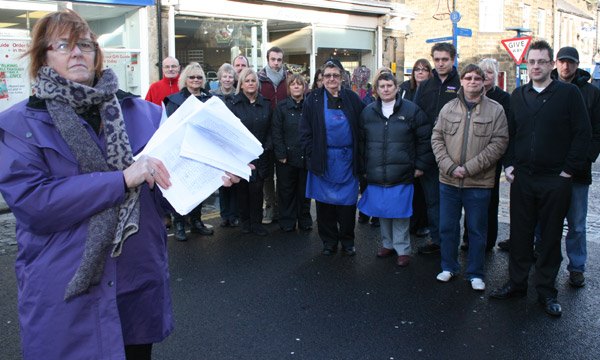 Update 30 Nov: 3,466 people signed the parking petition in one week. The petition has now been handed to NCC to be presented at a future meeting

Fed up traders on Amble’s Queen Street have handed in a petition to Northumberland County Council asking them to stop sending their traffic wardens until a solution to the parking situation has been reached. The petition was circulated for a week and was signed by 3,466 people.

Shopkeepers are frustrated by a lack of progress in reviewing the parking on Queen Street and claim the Council’s parking enforcement strategy is driving income away from Amble.

“I’ve written to County Councillors, lots of different people at County Hall, but the response is a stonewall,” said 42 Queen Street shop owner Ann Burke. “It’s killing the street. It’s not just us, it’s residents too. Elderly people can’t park their cars near their homes. Trade has gone down –one store says 25% of its trade has been lost since June 1st when the parking enforcement started.”

“Everyone’s up in arms, everyone is signing the petition,” said Karen Athey, owner of Leanne’s boutique. “It’s definitely affecting business. Trade is bad enough, people are skint to start with, without paying fines to the Council. It’s putting customers off coming in. If [the Council] carry on, they’ll close some of these shops. They might resolve the parking but they’ll lose rates.” 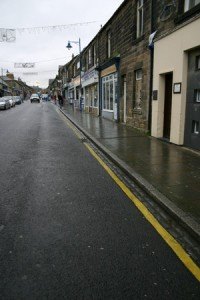 “It’s really noticeable when the wardens are here,” said Queen Street Convenience Store owner Kevin Rutherford. “A lot of people want to drive up, run in for a pint of milk and the lottery – but they can’t park at all outside our door.”

“There’s only been one person who wouldn’t sign the petition,” said Chapman’s confectionary shop owner Stephen Turner, “and that’s because he lives in a neighbouring street and he says he can’t get parked outside his house any more. A woman was in [my shop] thinking of moving to Amble; she asked me, ‘Where can I park?’ I said, ‘I honestly don’t know.’  The Council is killing the shops. It’ll end up as a ghost town. If your takings are down 25% you think – do I need that extra member of staff?”

“When the traffic wardens come on the street, all the cars disappear,” said Ann, “then the next lot of cars drive down, see that the street is empty and realise – or assume – that the traffic wardens must be around, so they drive away too. It’s every day, including Saturdays and Sundays, anytime from 8 in the morning to 7 at night.

“Amble had the traffic wardens every day for nine days solid. We had our Christmas Fayre on Sunday and the street was closed all day. They knew it was our Christmas celebrations, but they were there at 7.30am, to patrol the rest of the town centre.”

“There are wardens early in the morning and late at night. They are just here long enough to slap tickets on then they go. They’re only here for money,” said Stephen.

“What’s going to happen when the Middleton and Wellwood Street are closed because of the Northumbrian Water works?” asked Ann. “People in Middleton Street have been told they all need to move their cars during the roadworks.

County Councillor Robert Arckless told The Ambler: “Local councillors understand the impact the present situation is having. We want to work together to improve the parking situation in the town centre. I will not defend the indefensible; the implementation of the present parking regime has been a disaster.”

Ann intends to hand the petition to Northumberland County Council at their next Council meeting.

“I know that money was found for Warkworth to have a consultation and the County Council suspended all parking enforcement until that consultation is complete. I’m just asking for the same for Amble.

“I’m asking people to sign this petition to show the strength of feeling of everyone in the town. I’m totally fed up of  Northumberland County Council’s stonewalling and the lack of consideration for businesses and the people of Amble.”

Have you been affected by the perking enforcements in Amble? Do you agree with the petition? Let us know.