Can you help find photo of Jackie Milburn?

What I would like to find out via your webpage is if you could ask readers if anyone can remember when Jackie Milburn the famous footballer visited the Royal British Legion Branch that was in Amble about 10 years ago. The man who was on the committee of Amble branch at the time remembers having his photo taken with Jackie Milburn and we are trying to locate the photograph.  If anyone can provide info on this event/photo contact Warkworth and Amble District British Legion on 07785 753100.

The Remembrance Day Service was held 11 Nov 2012 at St Lawrence’s Church, Warkworth organised by the branch, Amble organised by Amble Town Council, and the ceremony at Acklington organised by Acklington Parish Council. Wreaths were laid at the war memorials. 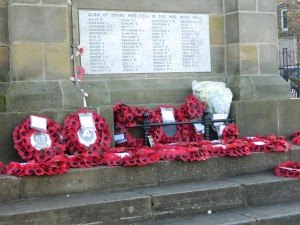 The Poppy Appeal this year in our branch alone raised over £5,500 and we are still counting, which is all down to the fantastic support of the public in making it one of our best years ever.  The Legion could not carry on its vital work without you all. Thank you to all our members who collected and our loyal team of volunteers who braved the cold to go door to door.  The Poppy Collection organised by Legion Member Keith Stenton from the businesses in Amble will be extra to the branch total.

We wish you all a very happy Xmas and New Year