An Amble business has done the double in the North East Business Awards.

QuestUAV, a manufacturer of small, fixed wing unmanned aircraft, has won two prestigious awards and are finalists in a third category in the Tyneside and Northumberland heat of the NE Business Awards 2013. The company, which is based in Amble’s Enterprise Park, succeeded over tough competition from much larger established companies to win the Innovation Award and Best Newcomer Award, and become a finalist in the overall Small Business of the Year Award. It is now going into the regional awards.

Owner Nigel King (pictured below) said: “It was an honour to win one award and it was stunning to win a second. It was a great evening, and we look to build on that success.” 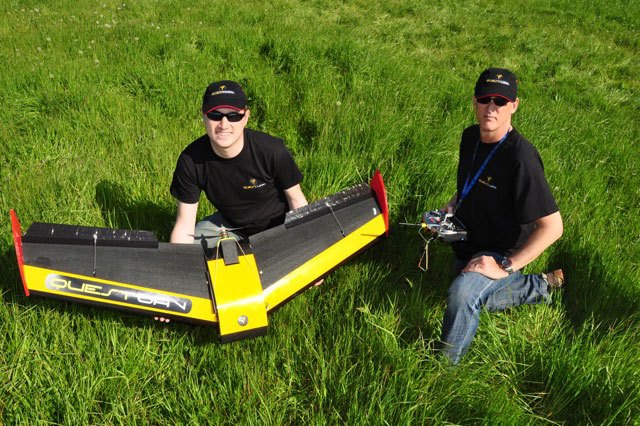 Although a local firm, their clients include the European Space Agency, British Antarctic Survey and many highly acclaimed universities around the UK.  They were recently featured on national television.
The NE Business awards is an annual ceremony, organised by The Journal and Teesside’s Evening Gazette, in association with North East Chamber of Commerce. QuestUAV were the only company to win two awards in the Northumberland area heat.

There are currently six staff working at QuestUAV, but they are expecting to move into bigger premises in Amble and take on more staff.

“Considering the company is only 18 months old, it shows the desire and determination from all the staff at QuestUAV,” said Nigel.