Puffin with Pride: have a wonderful festival 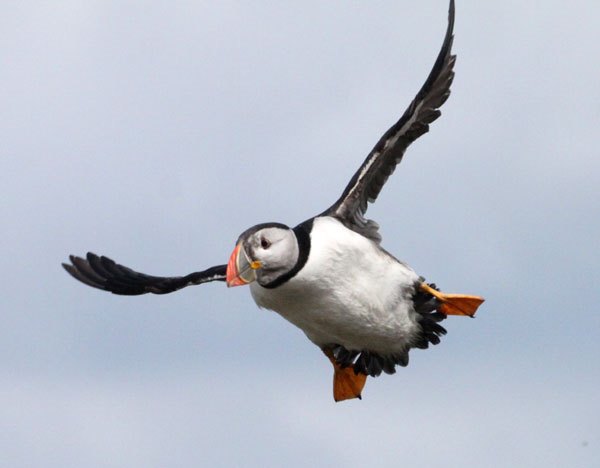 These much loved little birds have earned us a government grant to extol the virtue of shopping in Amble. They deserve some publicity.

They are often called the ‘clowns’ of the Atlantic – you cannot watch them in flight without smiling!

Their colourful red beaks are only evident in the breeding season – they are five years old by then, and can live for 20 years or more – the record is 36years. They have one partner and remain faithful for the rest of their lives – meeting up at the same breeding place every March until August.

They nest in the ground, sometimes using rabbit burrows. They lay one single egg between April and May and both ‘mum’ and ‘dad’ take turns to incubate the egg –  36 to 45 days. The young puffin is called a ‘puffling’ – how cute is that?

Their extraordinary flight is because their small wings are adapted for underwater swimming to catch fish, consequently when in the air they have to beat at least 400 times a minute to stay up there!

They only breed in a few large colonies – mainly in the Channel Isles – we are very privileged to have our own colony on Coquet Island. Their greatest danger is from humans who come in boats to see them and disturb their breeding ground. So, we are grateful to the keepers and carers of our colony for protecting them from human invasion. Enjoy this wonderful Festival.