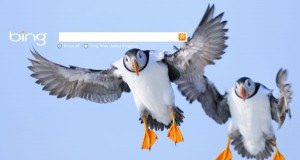 On 18th May, Microsoft search engine Bing will take flight as two Atlantic Puffins make an emergency landing on its homepage. The Atlantic Puffin, lesser known as ‘fratercula arctica’ has been chosen to represent the start of the two week Amble Puffin Festival at Coquet Island, on the Northumberland coast.

The image itself will include links to a Bing search page of more information about the Puffin festival, which celebrates the thousands of Puffins that nest on the RSPB seabird sanctuary just a mile away from Amble (locally nicknamed ‘the friendliest port’).

The festival promises a fun filled two-weeks of activities from wild life talks, to live music and entertainment. Festival goers will also be hoping to catch a glimpse of the Coquet Island Puffins as they care for their newly hatched Pufflings.

This specially chosen homepage image will be made visible to 12.7 million people across the UK as they complete their daily search tasks. It will include a gallery of further images of this loveable bird which is disparagingly nicknamed ‘the clown of the ocean’, and a video about a lesser known seabird; the Roseate Tern, the likes of which are also protected on the island.

Finally, the homepage will also include a link to the location of Coquet Island on Bing Maps.

Update: the Bing homepage links are pictured below

One thought on "Bing brings Amble Festival puffins to your homepage"