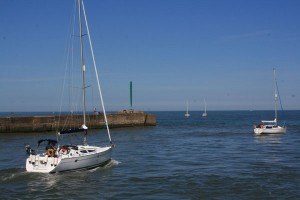 In a day of light breezes, which veered from NE to ESE across Alnmouth Bay, five sailing boats of all shapes and sizes competed for the Amble Marina Trophy 2013, organised by Coquet Yacht Club.

A crisp start was made with Wild Rover and Sanda Sund leading the pack through the line, closely followed by C-Beagle and Jondalar II a little later. Turning on to the northerly leg, Wild Rover, already ahead of the rest, set her spinnaker and fairly clipped along this and the next leg. With barely a whiff of breeze and 0.0 knots showing on the log, Lindy Lou called it a day and soon after C-Beagle called for a beer.