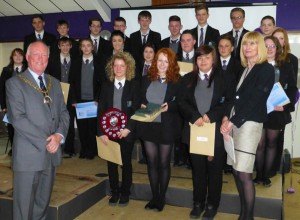 The year 11 end of school awards service was held on Friday 24th May and was attended by parents, governors, councillors and sponsors.

Awards were given to celebrate the success, achievements and hard work of individuals but certificates of recognition were also presented to students who had stood up out of the crowd and shown great effort and determination. Tutors said a fond farewell to the students and reminisced about the past three years. The students took the opportunity to  give out some awards of their own to the staff.

Leigh Black, who plays goalkeeper in the U16 UK school team and Scott Harvey who is a very active and enthusiastic member of Alnwick Rugby Club were given ‘Special Achievement Awards’ in recognition of their sporting prowess and effort.

The over-all ‘Pupil of the Year’ award was presented to Georgia Soan, by Mrs Graham and Mayor Craig Weir.  Amble Town Council had given the school a shield for this purpose to commemorate the Queen’s Jubilee and the Olympic Games and this will be engraved each year.

“Georgia has achieved this award due to her continued effort, enthusiasm and commitment to the school and her studies throughout her three years at JCSC”, said Mrs Graham, “She is a wonderful example of the students we have in school and is a role model for others and we look forward to welcoming her back in September. Well done!”

Mr Peter Eyre, Head of School said, “I was delighted with how many parents came to support their children and share in their success.
“It was quite a poignant afternoon for many, but the over-whelming feeling was one of warmth and familiarity. The students will all continue with their revision lessons until the exams are over and will then have the opportunity to enjoy the summer break, before returning to join our sixth form.”

One thought on "School recognises achievement"