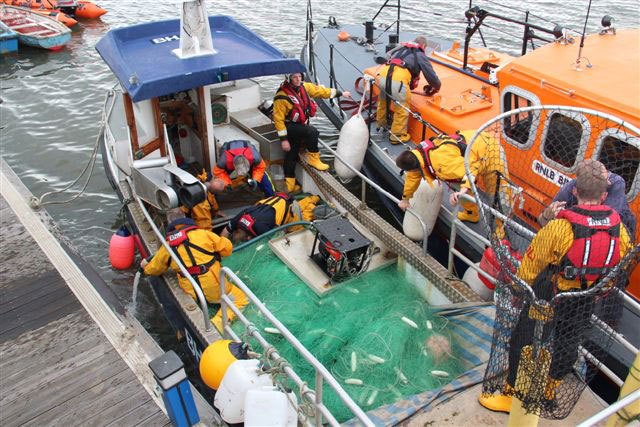 The Amble lifeboat crews have had a busy time recently, rescuing boats and crews in difficulty, with four rescues in two days at the end of July. Each incident has different problems, but the lifeboat crews have saved boats and even lives successfully. Amble RNLI recognises that as the weather improves and more people take to the sea, the number of incidents increases.

Fishing boats are among the recent casualties. The fishing boat “True Vine” was taking in water in its engine compartment. Another took a wave broadside and got tangled in her own nets.

A motor cruiser “Wave Dancer” also became  entangled in fishing pot tows, which resulted in a lot of rope around the propeller, which stalled the engine.

Mechanical failure caused the lifeboats to be called out a number of times, especially with drifting boats. The lifeboat coxswain normally checks that those in the boat are in no danger and then makes a decision about the boat, which often means towing it into harbour and organising repairs.

Sometimes the main anxiety is for the people on board. One of the boats drifting towards rocks had a pregnant woman and two young children on board. All three were taken back to shore, while the skipper stayed with the boat until it could be towed into the marina.

Sometimes it’s a crew member who needs help. A member of a yacht crew collapsed and became unconscious. Lifeboat crew gave first-aid to the patient who was suffering from a diabetes attack. He was eventually taken to hospital by ambulance.  Commenting on this rescue, Amble RNLI Coxswain John Connell commented “Our crews are well trained in first-aid techniques for situations such as this, but we are particularly fortunate here at Amble as we have two fully trained paramedics on our crew”.

RNLI volunteers at Amble and Seahouses have been trying out the charity’s latest life-saving vessel, the new Shannon class all-weather lifeboat ‘Jock and Annie Slater’.

An RNLI team of naval architects, marine engineers and operators has spent several years developing the Shannon class which has been formally accepted into the charity’s fleet. Capable of 25 knots and powered by water jets instead of propellers for increased manoeuvrability, it is the most agile all-weather lifeboat in the RNLI fleet.

It has been named after former RNLI Chairman Sir Jock Slater and his wife, Lady Slater. The vessel is currently visiting several lifeboat stations to give volunteer crew members the opportunity to try it out.

Rodney Burge, Lifeboat Operations Manager at Amble RNLI, said: ‘We have all been very impressed by the Shannon – it’s a completely new concept in lifeboating. When I started volunteering with the RNLI 45 years ago, we had a Watson class lifeboat that had a top speed of around seven knots and no radar. This one is more than three times as fast but still feels incredibly smooth in the water, even at top speed. We’re now all looking forward to 2017, when we should receive our own Shannon at Amble.’

The Shannon also visited Berwick-upon-Tweed for RNLI volunteers to trial the lifeboat, before going on to RNLI stations on the east coast of Scotland. 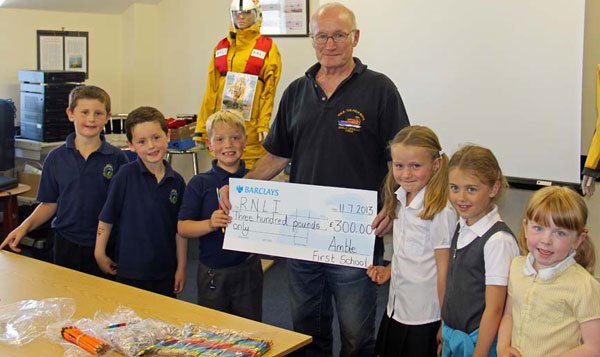 These children all have a relation connected with the RNLI. Matthew, Kieran, John, Abby, Olivia, Lyla presenting the cheque to Rodney Burge, Amble Lifeboat Operations Manager

At the Lifeboat Station the children were shown a presentation which emphasized beach and sea safety. They saw a video and were taken around the lifeboat station and shown the lifeboats and allowed to try on the equipment worn by the lifeboat crew.

The children presented the lifeboat station with a cheque for £300. This was money raised by them at their harvest festival, when they celebrated the “Harvest of the Sea”.
Rodney says that it is very important especially for children who live by the sea for the RNLI  volunteers to meet and stress to children at an early age the importance of how to be safe around water.

Generous Ponteland children support Amble RNLI
The RNLI has recently awarded a ‘Regional School Supporter’ award to Richard Coates Church of England Middle School in Ponteland as a ‘thank you’ for their dedicated support of Amble lifeboat station.
Richard Coates School has strong links with Amble RNLI, and so far they have raised over £2,000 for the charity.