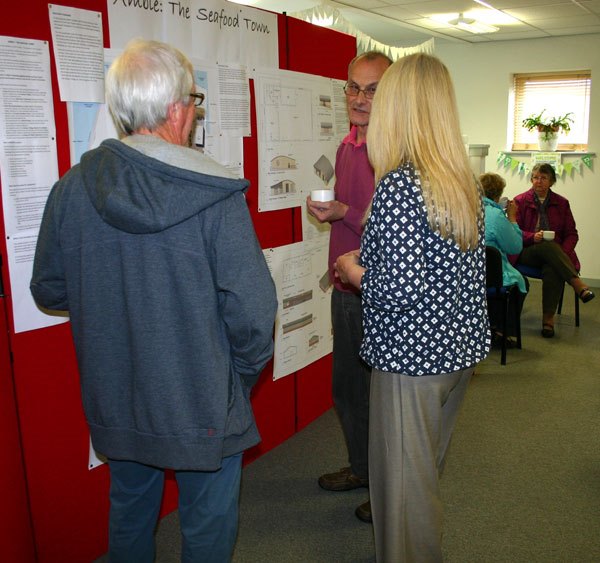 The application has now been submitted to the Coastal Communities Fund, with a decision expected in January.

Scores of people viewed the plans which were on show at Fourways2 at the end of September.

Comments were almost universally positive for the development, which would see the creation of small business incubator units and a seafood centre as well as a waterfront walkway.

“It’ll be an asset to our town and it’ll bring much needed employment” said Mayor Craig Weir.

One woman was so interested in the plans, she put her name down for one of the incubator units.

Amble Development Trust Director Julia Aston said “We are obviously very happy to get past this stage because  the planning application had to be in place prior to any submission to the Coastal Communities Fund – which had to be submitted by Monday 7th October.”

The plans were developed by a team of people from the County Council,  Development Trust, Town Council and business and community representatives.

The scheme is an attempt to bring  jobs and help sustain Amble’s fishing industry.  A seafood brokerage would be established, to develop a brand, to increase the value and help to find new markets for local catch.

“In addition to the physical development there’s a skills and training programme for the hospitalilty sector, there’s the creation of two jobs, one of which will work with the fishing fleet to aid their sustainability, ” said Julia.

” We also hope the harbour village will be a tourist attraction, which will help to sustain other businesses in the town. There will be better amenities for the Shorebase Trust and public realm enhancements, for example landscaping and a harbourside walkway” she said.