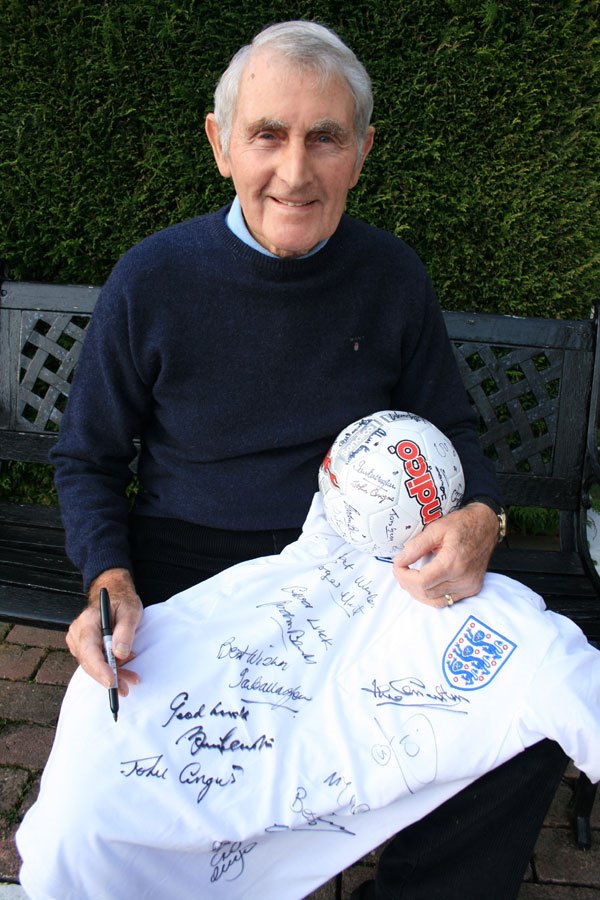 John Angus played for England in 1961

Local football veteran John Angus is helping to honour a former Newcastle manager. He has signed an England shirt and ball, which will be auctioned to raise money for a bronze plaque in memory of Joe Harvey.

Joe Harvey was Newcastle manager from 1962-75 but is yet to take his place in the Magpies’ ‘Hall of Fame’. A bronze memorial plaque (5ft. by 3ft.) will be placed on the Gallowgate wall if enough money can be raised.

John who started out playing for Amble Boys’ FC and now lives in Warkworth,  was called up a total of 10 times for England’s youth team and under 23s; his full cap came in 1961, when he made his debut for England against Austria in Vienna.

John played in over 500 matches for Burnley in the 1960s and 70s, as a defender, scoring 4 goals. He remembers playing at St James’s Park where he met Joe Harvey.

John has played with Roger Hunt, Jack Charlton, Bobby Charlton, and Gordon Banks. Signatures on the ball include most of the Newcastle players who took part in the 1965 Newcastle vs Burnley match.

“I’m happy to sign shirts for causes like this” said John. “I played over 40 years ago, but I still get requests. Now and then for shirts but mostly they send me programmes.”

Information on the auction and progress on the Joe Harvey commemorative plaque will be available on the Fairs Cup website, or by ringing Harry Watson on 0191 2620544.

Your correspondent is reliably informed that 29 May will be 45th anniversary of Newcastle winning the Fairs Cup.