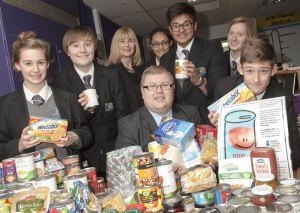 JCSC students with the food for the Amble Food-Bank

I always read The Ambler with interest and saw the article headed, “JCSC youngsters help North Northumberland food bank.” It is worth pointing out that the Amble Foodbank also benefited from that collection made by the pupils.

We work very closely with the North Northumberland Foodbank and any items collected by the College may be split between them and the Amble Foodbank.

The Amble Foodbank is co-ordinated by members of Vineyard Amble Church and started in June last year. Since then, 75 food parcels have been distributed in Amble for those who have found themselves in emergency situations.

Two homeless individuals were kept alive by food parcels when their benefits took seventeen weeks and six months to sort out. One said that without the food parcels, because of his circumstances he doesn’t think he would be alive today.

We have been amazed at the overwhelming generosity of Amble residents and the JCSC pupils whose donations of food items have helped so many people.

We have also been very grateful for the support received from the organisations that provide collection points – Queen Street Co-op, The Radcliffe Club, the five churches (including Hauxley Chapel) and the Youth Project.
They give people the opportunity to donate goods to top up our store week by week, so that we can be generous.
We also receive cash donations which help us to add to food parcels for families with young children by buying fresh foods, eggs, bread, butter, milk and fruit.

In the week before Christmas the Foodbank was stretched, distributing eleven parcels.

Referrals are made by Alnwick and District Citizens’ Advice Bureau, Amble Youth Project, Health Visitors (based at the Medical Centre), the churches and more latterly NETS (Northumberland Emergency Transition Service), which offers emergency help to those in need within the community. Parcels are then distributed from Amble Youth Project.