Rock Around The Coquet

The puffins on Coquet are getting ready for the Puffin Festival in style this year. The Pirate Puffins have sailed and this year the puffins are forming their own band “The Puffets”. 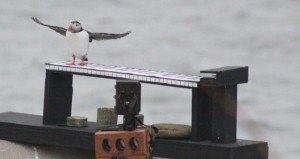 Rehearsals have been on-going since the end of March and the keyboard seems to be the focal point for the band. Specially acquired mini drums were bought from Amble car boot on the harbour and Stephen Lunn, our local blacksmith artist has made a special puffin sized percussion triangle to add to the instruments.

Watch out for videos and pictures at the Puffin Festival – the RSPB wardens are compiling some recordings for the very first Puffin CD before they go on tour round the North Sea in July!