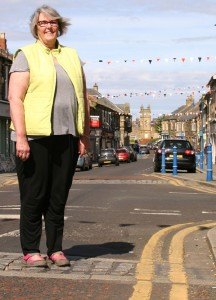 A letter has been sent to Northumberland County Council, expressing exasperation at the lack of progress on parking issues in the town.

Amble Business Club chairperson Ann Burke told the Ambler: “The Business Club sent a strongly worded letter to Northumberland County Council. We detailed our frustration at the lack of parking, lack of a long-stay car park, the restrictive lines on Queen Street and the Traffic Enforcement Officers.”

Several meetings and consultations on highways and parking in the town have taken place over the years, and last year a 3,000 signature-strong petition organised by Ann was handed in to the Council.

The petition brought about the lifting of the parking restrictions on the loading bays, but since then, there has been no further progress.

Ann said: “The biggest problem in Amble has been the lack of long-term parking, the congestion on Leazes St and the Parking Enforcement Officers. I hope this letter brings some action.”

During the meeting of the Area Committee-North, it was agreed to set up another meeting to discuss Amble’s parking issues.

Notes from the meeting

An officer updated the committee that a consultation had taken place during the winter and they had been working with the Business Club and the Town Council. She informed the committee of a Park and Ride scheme which will run at weekends over the summer from 10-4pm. They had been also looking at temporary arrangements, talking to local landowners, considering putting cones along Leazes St, and looking at the possibility of using the Braid. There is a car park there already, but it was considered too far away for town centre parking.

Ann Burke, Chair of Amble Business Club said: “After 17 months of consultations, there is no further progress. We have not been supported by the local authority. The traffic problems around the harbour are disgusting. The Council is one big table where they just move bits of paper around. I have to ask: is Northumberland County Council fit for purpose?”

Cllr Jeff Watson said: “Parking in Amble and Warkworth is one of the most frustrating things I’ve been involvedwith. Agreements suddenly fall by the wayside. Do we really know what we’re talking about? Why are people getting different messages from different people – and some are not getting messages at all? The Town Council hasn’t been involved (in discussions) for weeks. We need another round table and say exactly what we’re going to do and when.”

Cllr Robert Arckless said: “Parking is one of the issues I share with Jeff (Watson) – we all agree it’s a problem. We don’t all agree on the solution. There isn’t enough car parking space in Amble and the Park and Ride scheme is an experiment.”

Amble Mayor Craig Weir said: “Fourteen months ago it was agreed to remove the yellow line on the High Street. It is still there! There have been fragmented discussions. Why do we need another seven weeks for another consultation when we’ve been having the same conversation for the last 14 months?”

Cllr Dougie Watkin: ” NCC has given away £3.5million per year out of the budget for parking and traffic-related schemes, because of free parking. It’s been given away. You’ve kicked the hornet’s nest.”

Cllr Arckless: “It’s not fair to have unequal parking over the county.”

Cllr Glen Sanderson: “Pro-active officer time is needed as a matter of urgency. I formally ask the chair to speak to the executive member to get a meeting.”

This was seconded and agreed.

2 thoughts on "Frustration at lack of parking progress (Update)"