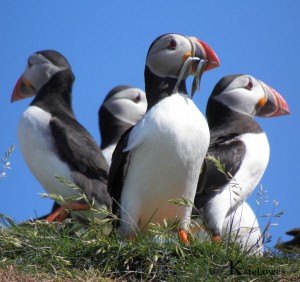 One mile off Amble, braving the might of the North Sea is RSPB Coquet Island, home to thousands of sea birds, seals and a handful of humans; together they share in each other’s joys and struggles, relying on each other in day-to-day island life. Unlicensed landings are illegal on Coquet but the island has thousands of visitors watching the island from puffin cruises which sail from Amble. Behind the scenes is the secret world of the RSPB island staff, a group of people that work tirelessly to protect the island, habitat and the thousands of breeding sea birds that make Coquet their home. This is my second year living and working on the island as a research student and I feel it is time to lift the curtain on island life so for the next (almost) 24 hours I will keep a diary of the human-side of Coquet Island, good or bad, happy or sad… wish me luck! 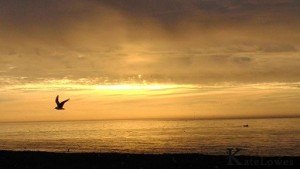 4am: I start my day early, watching the sunrise over the horizon waking the island gently with its warmth.This is my favourite time of day, I feel like I could be the only person in the world, looking out to the East, to the empty sea, such a peaceful and perfect start to the day. Of course the birds are already awake, busily chattering away. The island has a constant buzz of activity, hungry chicks to feed and constant squabbling between the boisterous black-headed gulls and the common terns. The terns can be mean, even the one that perches on the roof next to me on my watch occasionally tries to peck me on the head, but we are learning to tolerate each other and share the roof space. We watch together from the roof as the night watch ends, there are no thanks from the terns for protecting them all night and hundreds of angry beaks peck their weary heads. 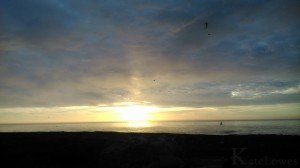 8am: My watch on the roof takes me till 8 o’clock, by then the island is truly warmed up and ready for another day…just in time for bacon sandwiches! Our kitchen is basic, with a small gas powered fridge, oven and wood burning stove; it’s homely, especially when a fire is already lit and the kettle is whistling. We spend a huge amount of time in the kitchen, sat around the table discussing mainland affairs that seem so unimportant out here. The kitchen sink looks out onto to the South garden, full of arctic terns raising their young; the best view in the world for doing the washing up! Wez the warden on the island informs us of one visit; Paul the site manager and Hilary coming out to re-stock the island supplies; hopefully they’ll bring some mainland treats out! I’m soon ready to leave the lighthouse, leaving Wez updating the RSPB Facebook page with his reserve photos and news. 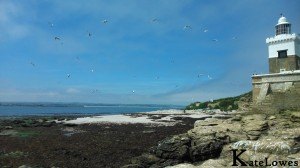 8am: I feel very lucky that most of my work takes me to the other side of the island, away from the terns. I love the terns but working with them requires a full waterproof outfit and at least 2 woolly hats which isn’t the most comfortable on a sunny day! The trouble is the terns don’t know we are trying to conserve them, it’s a misunderstanding that makes life very hard.  I pack up my bag with notes and spare pens, bags ready for samples and plenty of biscuits and juice and head off to work. I take my time on my journey to ‘work’ on my way around the inter-tidal, along here there are no birds and the birds on the cliffs don’t mind my presence as I clamber past. So I can enjoy the sun and the views without fear of tern-attack. My walk around the intertidal is different every day; I investigate rock pools full of crabs and anemones, count the kittiwakes on the cliffs and watch as droves of puffins leave the island on fishing trips. It is the perfect walk to work. Every now and then I bump into something special, like an oystercatcher chick pretending to be a rock, or a family of Geese introducing their goslings to the sea. In the high tides we have had recently there was a worry that the terns nesting on the shingle beaches may have had their nests washed away so I stop off to check; the nests are all fine, safely sheltered by the rocks, lucky birds! 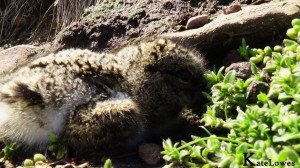 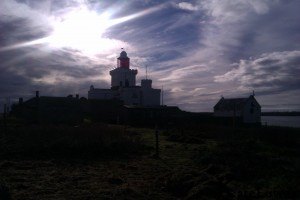 11am: I climb up onto the plateau, to ‘my’ end of the island; it’s so empty and quiet away from the terns. Just busy puffins running to and fro, they already have pufflings in their burrows to feed. The Eiders hide their nests so well that I have to tread carefully, they make no warning sound and sit steadfast protecting their young- I pretend I haven’t seen them as a slowly move around them. I could sit out here for hours, but once I’ve finished observations and necessary checks I head back down to the intertidal- out of sight and out of mind of the resident birds. I pick a spot away from the fulmars (they always look a bit grumpy) and eat my packed-lunch. I like sitting near the seals; spending hours of my day with only birds for company I find friendship in the only other mammals on the island. They are very tolerant of me and are a joy to watch. After a snack I head back up and do a final check of the plateau; all is well. 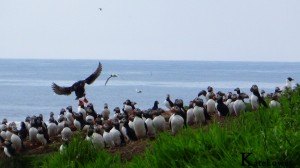 1pm: I go back along the intertidal, a bit quicker this time as I have lots to write up and I am eager see Paul and Hilary and hear what everyone else has done with their day so far. It’s strange being alone so much, I sing along far too loudly to my music and just hope I can’t be heard fromHauxley. Once back the lighthouse I have a catch up with the Wez and the rest of the team to find out what island jobs I can help with, it’s a real team effort on the island. After cup of tea we are ready to head out. The first job is pumping more water into the tank, because we don’t have running water on the island, luckily the marina has beautiful facilities we use almost weekly for showers. Next job is checking the terns, we monitor the productivity of the terns, allowing us to see how many eggs and chicks we have. It’s amazing watching the eggs hatch and chicks grow! 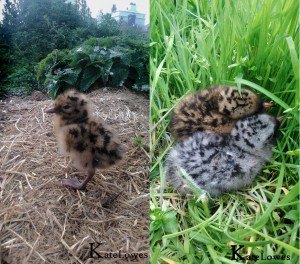 3pm: Paul and Hilary arrive with supplies for the island; fresh drinking water, wet wipes and of course cake! (We need some mainland luxuries now and then!) After another cuppa and catch up we are ready to head out to the black-headed gulls and ring some of their chicks as they are getting very big and beginning to fledge; they go from cute fluffy chicks to scruffy teenagers in a matter of weeks before they start test flights around the beaches. We have already started ringing sandwich tern chicks as well- everything is having a growth spurt at the moment! Every time we leave the lighthouse we work as quickly as possible and have to return often to minimise disturbance to the birds. 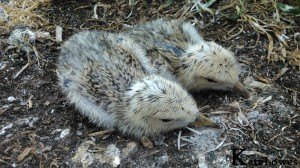 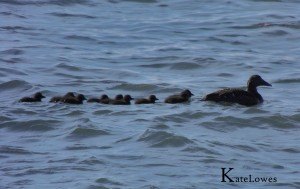 6pm: At the end of a busy day there is almost always an emergency, today is no different. An Eider had decided to take her ducklings to the sea, straight through the common terns and heading for the roseate tern terrace. Normally we wouldn’t interfere but as Wez and I were passing and the Eider was disturbing the entire island we stepped in to help out. She was looking absolutely battered, the common terns are ruthless in protecting their nests and she wouldn’t have lasted much longer protecting her ducklings from such an onslaught. As we approached she fled to the sea, so quickly catching her helpless ducklings we took them down to the jetty. The bond mother has with her offspring is so strong that she would’ve died protecting them, and now, although she was tired and injured she waited for them hoping they would make it off the island to meet her, and of course they did, we dropped them into the sea and they began calling to her, quickly they were reunited. Although the mother duck was injured she would soon seek refuge with other Eiders, many females that have failed to breed and others wait around the island and become aunties to the ducklings helping look after them. 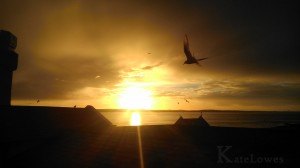 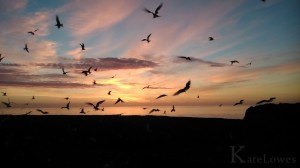 8pm-10pm: After a long day everyone is ready for a hearty tea, we discuss the day’s events and predict what tomorrow might have in store. Without electricity we have no TV to watch so conversation and a good book is our evening’s entertainment, and as the light fades we move up onto the roof to watch the sunset. A simple and honest way to live, it’s a difficult life out here but a good one and one that I wouldn’t change it for the world. As the sun sets over Amble the island begins to wind down, chicks and eggs tucked safe and warm under parents, the chatter of the terns quiets somewhat and we say our goodnights to the night watch knowing for the next 8 hours the island is safe under their watchful eye. 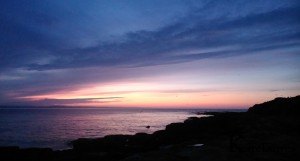