Did you know: poppies or cornflowers? 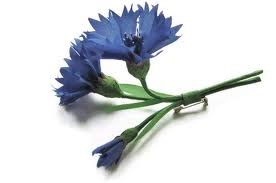 Ever since the First World War we have commemorated the event with poppies. In particular this 100 year anniversary they have been spectacular, covering our war memorials, carpeting the tomb of the unknown warrior and spread like a carpet beside the Tower of London.
Not so our Allies! France commemorates this with a carpet of blue cornflowers – sold in thousands just like our poppies, laid at the Arc de Triomphe, and worn by everyone.

In the language of flowers the cornflower indicates purity and innocence. Like the poppy it continues to grow in a land devastated by thousands of shells launched daily by the entrenched armies of the Western Front. These flowers were often the only visible evidence of life, and the only sign of colour in the mud of the trenches.

At the same time, the term ‘bluets’ was used also to refer to the class of conscripted soldiers born in 1895, because of the blue uniform worn by French soldiers after 1915.

The uniform worn by these young recruits, many of whom were not even twenty years old, was distinctive because it marked a break from the disastrous red pants worn by older soldiers – part of standard issue prior to the war.
Just as our poppies were commemorated in poems and songs so were the cornflowers of France.