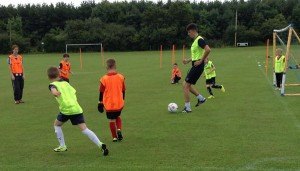 Two enterprising Amble footballers have set up a sports academy and are looking for football mad youngsters to join their project.

Josh Rutherford and Jamie Dixon set up Tiny Woods Football Academy in July of 2013. The pair were studying at Newcastle College when they decided to begin the academy.

“We were both in higher education,” said Jamie, “Josh completed his Foundation in Sports Science last  year, I finish this year. Instead of doing a placement, we decided to set this up. We both have coaching qualifications and  we are licenced by the Football Association.”
Unsurprisingly, the pair are keen footballers, playing for Amble Tavern and Stobswood, as well as coaching for various schools and clubs in the area.

Josh does sessional training work at Newcastle United Foundation and was awarded Coach of the Year from Northumberland Football Association.

The pair recently travelled to Italy, touring with Newcastle College where they played and coached, and in a local charity tournament, they raised £460 for the Stephen Carey Fund.

They have run a number of very successful football summer camps and are planning an open camp during October half term at Stobswood, as well as continuing to coach at the Welfare on Saturday mornings.