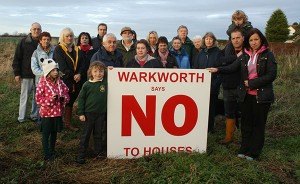 A protest meeting was held in Warkworth, against planning applications by Northumberland Estates, for more housing in Warkworth. According to organisers, 90 people turned up. The Parish Rooms couldn’t accommodate all, so they moved into the church.
Proposals are for 27 affordable houses off West Close, 37 houses off Morwick Road, 6 houses off Station Road, 11 houses off Watershaugh Road and 50 houses off Guildens Road.

The protesters say the plans submitted would have an impact on the village by overdeveloping. There would be too many houses built at one time and they estimate that the population could rise by 25%, if all were built and occupied, based on three people in each house. They believe that it would put too much pressure on local amenities, such as schools.

The three applications will be considered at NCC Full Planning Committee on 8 January 2015. The applications can be seen online: Watershaugh 14/03313/OUT, StationRd 14/03312/OUT, Guildens 14/03494/OUT. Objectors have until 10 December to register their opinions.