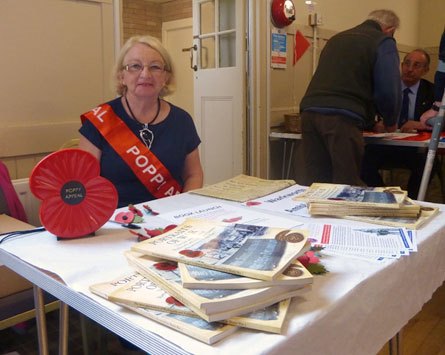 Warkworth and Amble District branch’s Battle of the Somme Exhibition, in Warkworth on Saturday July 2, was a huge success thanks to all who attended and contributed. On the day, £1,000 was raised – a fantastic contribution to our local Royal British Legion Poppy Appeal!

Thank you to members of the public, branch members, local businesses and the Rotary Club for their continual support. The wonderful prizes that were donated made the raffle extremely popular. Warkworth Village Choir and Beverley Palin of Amble entertained us with a great selection of popular music from the war period throughout the day.

Also at the exhibition, Branch Secretary, June Watson, launched her book “Portraits of War – The men and women of Warkworth and Acklington who served in World War I”. The book is 134 pages of well researched biographies of local men who participated in WW1 and also two Warkworth nurses who served on the battlefield.
Many of the soldiers originated in Amble, Chevington and Broomhill and had moved around the district working in various collieries while others were involved in agriculture. Some had even emigrated to Canada and returned to join up.

Also featured are the sons of the three Warkworth brewing families (the Sandersons, Lambs and Deuchars) and other professionals. We are asking for a donation of £10 for each book to be donated to the branch Poppy Appeal.
If you would like a copy please call 07785 753100. Please add £3.99 post and packaging if you would like a copy posted to friends and family living in other parts of the UK. Perhaps a birthday or Xmas present!

Amble soldiers were featured in the book “In Memory of the Fallen” compiled by Amble Town Council in 2014.

Programme of events
Wednesday, August 10 at 7pm
Social Night at The Trap Inn, Broomhill.
Everyone welcome!
Speaker: Alan Fidler who will give a talk on The Collingwood Battalion, Royal Naval Division WW1