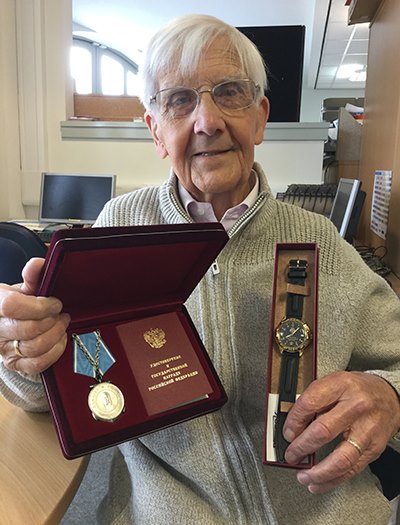 Richard Aston with his medal and watch, signed by Vladimir Putin

Amble WW2 veteran Richard Aston, who took part in a vital supply convoy in treacherous conditions, has been awarded a prestigious medal by the Russian Consul General.

During WW2, Richard (known to his friends as Dick,) was a telegraphist on HMS Trumpeter, and took part in one of the Arctic convoys, when British and American naval ships helped deliver much needed supplies to Russia.

Between 1941 and 1945, the Royal Navy escorted hundreds of merchant ships, often in the harshest conditions, and many were sunk by German U-boat attacks.

“Churchill described it as a ‘hellish job’” said Richard. “We went with food, ammunition and fuel, and the Germans were doing everything they could to stop us.

“I remember the bitter cold, minus 34 degrees sometimes, with rough seas. It took us three weeks, our convoy leaving from the Orkney Islands to Murmansk.

“Yes, I was nervous, but it was part of the job. The seas were rough, but you hope for the best. I couldn’t swim – actually many of the crew couldn’t swim, but the sea was so cold, if you got in, you only had a three minute survival rate – so it wouldn’t have mattered if you could swim or not!”

Richard described how honoured he felt when receiving the medal. He and his four daughters travelled to Edinburgh for the ceremony on 30 August, expecting to receive his medal with other Arctic convoy veterans, but his was a one-to-one meeting.
“I met the Russian Consul, General Pritsepov, who talked with me for about an hour, then he stood and shook my hand. He pinned the medal on me and presented me with a watch in a presentation case signed by Vladimir Putin. Then he said ‘See you tonight for the reception.”

The reception to mark 75 years since the convoys, was a lavish affair, held on the Royal Yacht Britannia, with 250 guests, bands, pipers, champagne, speeches and cameras everywhere.

Forty veterans were presented with gift bags containing a specially distilled whisky, a tartan rug created for the occasion, a hip flask and a book containing interviews of other Arctic convoy veterans.

After the war, Richard returned to Amble and resumed his career in the Post Office. He married Doreen in 1948 and they had four daughters. Doreen died in 1990. Richard has six grandchildren and four great grandchildren.

“The Consul was absolutely lovely. He shook hands and looked straight into our eyes,” said Richard’s daughter Eleanor Cromarty.

“He said there was not one family in Russia that hadn’t been affected by deprivation. He said the Russians were hugely grateful for the Arctic convoys.”