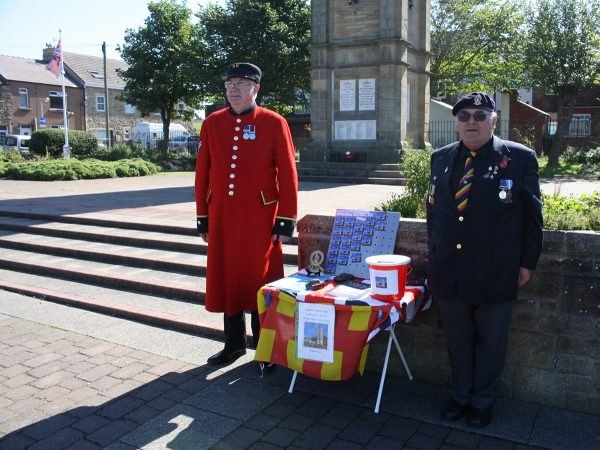 Veteran Peter Proctor Cannon (right) was joined in his fundraising by Chelsea Pensioner David Lines. Peter is collecting in the Town Square every weekend until the end of August.

Fundraising for the clock tower restoration project continues to receive a great deal of support, with approximately £2770.44 raised so far, and the announcement of a grant of up to £30,000.

Veterans Peter Proctor-Cannon and Fred Coxford of 15/19 the King’s Royal Hussars, have raised around £1200 for the Amble war memorial repair fund. The pair have collected money in the Town Square over several weekends over the summer.

“I’m gobsmacked at how much we’ve collected, and as proud as punch. We started on Mauretania Day and we’ll carry on till August Bank Holiday,” said Peter.

Estimated costs for the memorial restoration are £50,000, with the Town Council hoping for a grant from the War Memorials Trust.

Amble War Memorial has announced that the project will benefit from a grant of up to £30,000 from War Memorials Trust supported by the First World War Memorials Programme.

The funding represents 56% of the total cost to restore the Amble War Memorial, including professional Engineer and Conservation Architect fees and will cover repairs to the roof and internal structure, improved drainage system and repairs and cleansing of the clock mechanism.

The tender was won by Stone Technical Services, building restoration & maintenance experts based in Darlington and the work will be overseen by Blackett-Ord Engineers and Architects, both are specialists and highly respected in their fields. 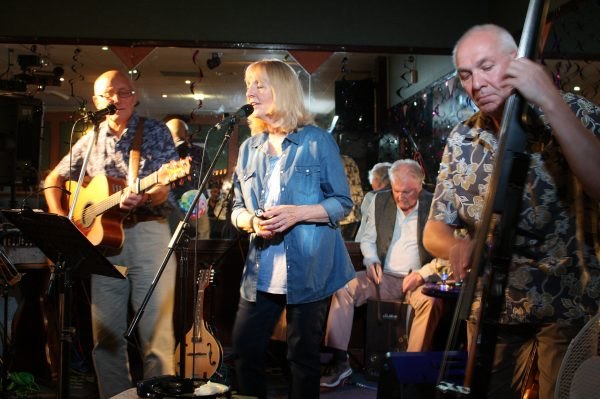 Above: Prelude playing at the clock tower fundraising event at the Bede Street Club in July

Frances Morton, Director, War Memorials Trust said, “War memorials are a tangible connection to our shared past by creating a link between the fallen and today. It is vital we ensure all our war memorials are in the best possible condition for their age and the charity is delighted to support this project. The centenary of World War I is a wonderful opportunity for local communities across the county to protect and conserve their war memorials.  If anyone knows of any other war memorials in need of help please contact us”

Jane Dargue, Amble Mayor, expressed her delight at this news also commenting that;

“Our heartfelt gratitude should also be noted to the community who have been fantastic in their support and fundraising. We believe a further fundraiser at the weekend raised in excess of £1700 – which takes the total raised by the community to just under under £5000 at present with funds continuing to be raised! This is an absolutely amazing figure- credit to all those involved and all those who have so generously contributed to something which clearly means a great deal to the community. It is very fitting that the memorial, originally created through public subscription, should be given a new lease of life through public support so many years on”

15/19th Kings Royal Hussars Veteran Peter Proctor-Cannon has spent every Saturday for the past two months fundraising with a collection bucket and providing information on the war memorial and also a friendly face to both the public and tourists; he has raised a substantial amount with the support of fellow Veteran Fred Coxford.

The Veteran presence and the connection to the Royal Hussars is incredibly evocative as the site of the memorial was given by EM Lawson Smith Esq, in memory of his two sons who fell in the great war, one of whom was a Lieutenant in the 13th Hussars.

The Town Council is hopeful that the work will be complete in time for Remembrance Day.