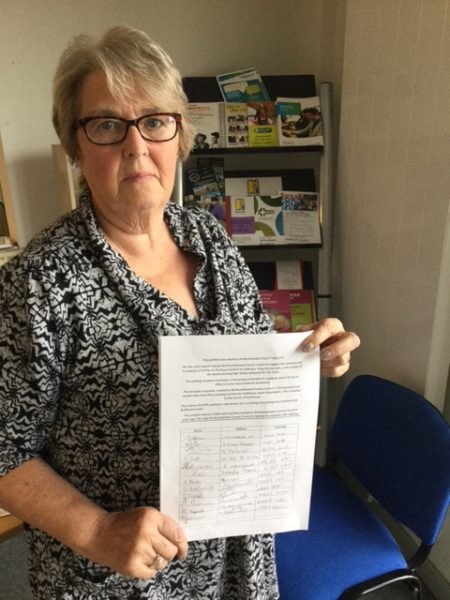 A second parking petition has been launched in Amble, after the original petitioner expressed disappointment at the lack of progress in finding a parking solution for the town.

She told The Ambler: “I’m concerned with the general gridlock and traffic chaos over the summer.

Sometimes it’s felt claustrophobic on Queen Street and the rest of the one way system, with cars parked on both sides and the centre of the street full of traffic.”

She was angry that although people are encouraged to come to Amble, they are frustrated at the lack of parking, and are going elsewhere.

“Local people are going elsewhere to shop because they can’t find parking. Visitors are encouraged to come – quite rightly so, Amble is a lovely town, with lovely restaurants and unique shops – but they can’t get parked.”

Ann’s original parking petition was set up in July 2013 and gained 3000 names. “That was set up because the traffic wardens were scaring people off the street. One year later, there was still no feedback, so I went to the Northern Area meeting, and from that we set up a parking group.”

“It’s now four years since the petition. We have a small amount of parking in the car park behind Tesco, but the lease for that land is up this year and the owner has other plans for it.

“The other car park (on Coquet Street) is leased to the Marina by Northumberland Estates, and there’s no fixed number of spaces that they have to provide, so theoretically it could be very much reduced if the Marina want to do something else with the land.”

Ann’s research indicated that in 2014 over 300 people worked in businesses from the Wellwood to the end of Leazes Street. Of those people, 140 travelled in from other areas by car.

“Hence, we are bringing the plight of parking in Amble to the attention of the new administration at County Hall,” she said.

“Amble is not just a town purely for tourists. It’s a business hub for local villages and hamlets: Warkworth, Hauxley, Acklington, Alnmouth, Guyzance and North Broomhill. People from those places come to Amble for the Post Office, dentist, opticians.

“Everyone’s shouting for more infrastructure, but currently there’s no long stay spaces for people and businesses to park.”

The parking petition will be delivered to the Northern Area meeting in October.

If you feel the parking situation in Amble needs to be solved, Ann encourages you to sign. It is available in all shops.