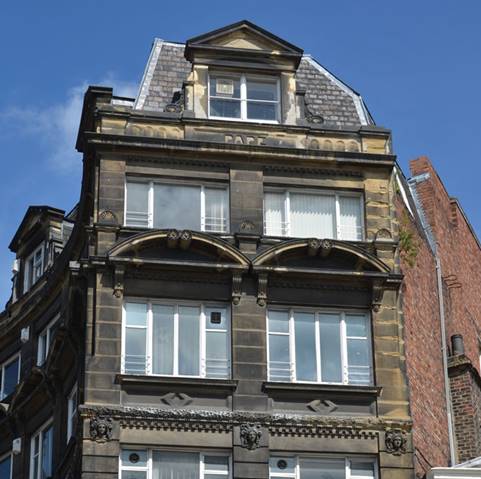 The Pape name features on this building on the corner of Collingwood St and Pink Lane in Newcastle. Photos courtesy Dave Howarth

Hands up who’s heard of William Rochester Pape? Ok, me neither, but that’s probably because I know nothing about shotguns. If I did, I might know that the aforementioned fellow was a big cheese in the nineteenth century shotgun world, having developed and patented the choke boring system. (No? Well, bear with me…) Not only that, but he’s also credited with holding the first official dog show in Britain.

Also, and here’s why this is all so exciting, this inventor, gunsmith and dog breeder was born in Amble, in 1832. His parents were Dorothy and James, who ran a grocery, butcher’s and game dealer business here. They also seem to have run a fishing business from what must have been their family home, Coquet Lodge in Warkworth.

In the early 1840s the Pape family moved to Newcastle, where eventually young William took over the business, which then included selling guns. Between 1860 and 1889, Pape expanded the company, selling and manufacturing guns and employing several staff. By 1937 William R Pape and his family had run businesses in Alnwick, Newcastle and Sunderland.

In 1859, 32 years before Crufts’ first dog show, and 14 years before the Kennel Club came into being, Pape organised and judged the first official dog show in Britain. 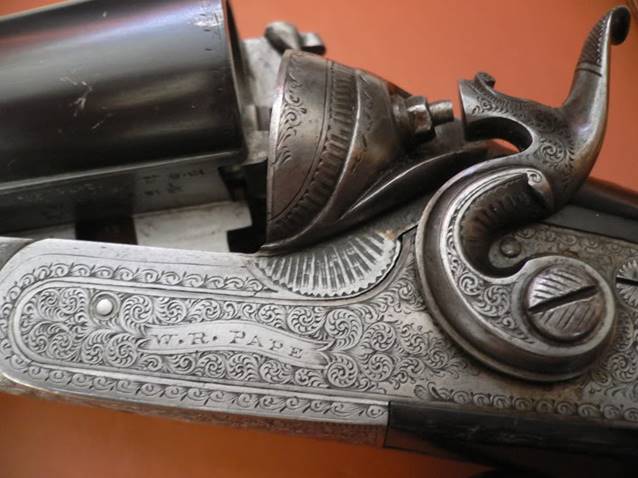 It was held at the Corn Exchange in Newcastle. There were two classes; pointers and setters, and the competition was open only to males – and that included the dogs! (Good grief, Victorians, what were they like?)

The Kennel club was founded in 1873, and their documentation on pedigree breeds and results dates back to Pape’s 1859 show. Throughout his life, Pape continued to breed and train gundogs at the family home at Coquet Lodge.

Pape was born in the age of flintlock muzzleloaders, and despite no evidence of an apprenticeship, he made his first shotgun in 1857. He went on to develop the choke boring system, which The Field Magazine explains as “the constriction at the muzzle end of the gun that tightens the pattern of pellets.” Seemingly the origins of choke boring are now disputed, but our William patented his system in 1866 and won prizes and a diploma of merit.

Pape’s inventive nature continued in the 1890s, when he also filed patents for window cleaners and draught excluders. The Pape name was held in high esteem due to the good quality of their guns.
After his wife died, William moved back to Coquet Lodge, where he appears to have lived for the next 20 years. In 1923, he was run over and killed, and is buried in Newcastle.
Anna Williams