Posted on 04th May 2018 | in News , Northumberland County Council 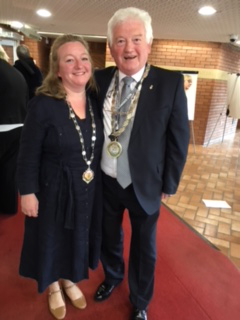 Cllr Watson, who represents Amble West with Warkworth, takes up the one year post, where he will represent the County Council in a ceremonial role at various civic and community events.

“I was unanimously elected, and so I’m delighted,” he told The Ambler.

“It is the first time a councillor from Warkworth, Amble and Acklington ward has ever been elected civic head. It is quite an honour.”

Jeff will represent Northumberland County Council at various events in the coming year, and a busy diary lies ahead.

“This year we’ve got the Great Northumberland Event, The RAF’s centenary, and the commemoration of 100 years since the end of WW1.”

Jeff’s chosen charity is the Royal British Legion and any money raised for them will be distributed in the Northumbria region.

I will try my best to represent and visit all the areas in the county. It’s going to be a busy year,” he said.