The scariest thing about the NTC’s production of Dracula, the Travesty, was being afraid of being picked on by one of the cast to take part in proceedings. 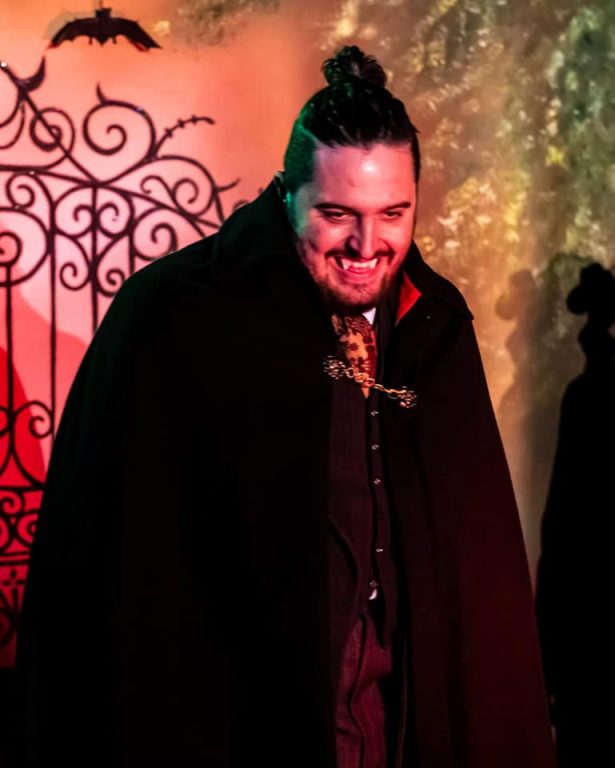 David McCarthy in NTC’s production of  Dracula:, The Travesty

Devised and created by NTC actor and writer, Stewart Howson, this Dracula was funny, light, almost pantomimesque – Oh yes it was! Dracula, the Travesty was directed by Gillian Hambleton, and she played most of the other parts too, apart from Johnathan Harker/Dracula who were played by the tall dark and handsome David McCarthy.

You may remember him from Heartspur, but this time he was minus the Elvis quiff and leather jacket. He is still tall dark and handsome though, as he kept telling the audience.

Atmospheric sound effects were provided by members of the audience, as were many of the laughs. Thank you, Ken.

This was Gothic storytelling at its best; imaginative, atmospheric and physically exciting with plenty of audience participation, humour and music.

As Bram Stoker said, “I am turning in my grave.” We are so lucky in Amble to have this quality theatre on our doorstep. Whatever the NTC do next make sure you don’t miss it!

UPDATE: NTC’s next production is: The Stars Look Down which is touring September – October. It will be at The Dovecote Centre on 6 September at 7.30pm.
Contact NTC on 01665 713655   www.northumberlandtheatre.co.uk