It is with deep sadness that my brother died unexpectedly aged 60 years of age. He was taken away far too young and too soon. We were brought up at the bungalow Sunnyside, South Broomhill, and the family later moved to Gibson Street in Amble. He did some amazing filming over the years including three months travelling with Gary Lineker, visiting the countries of footballers who won the Golden Boot.

Angela sent us this wonderful tribute to her brother from his friend, director Paul Balmer. 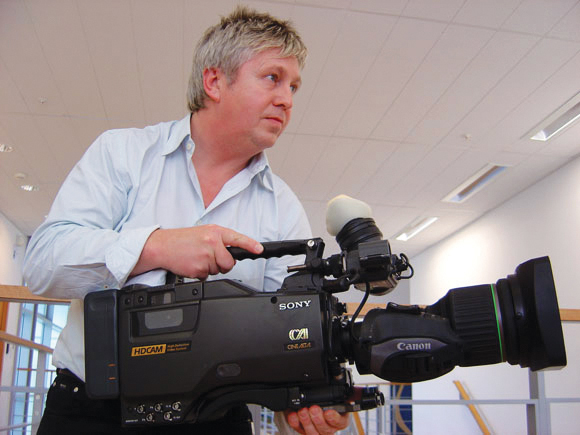 Cameraman Robert Foster worked with a host of celebrities

The late Robert Foster B.A. A tribute by Paul Balmer (Director)
Cameramen are invisible, they work at the ‘other’ end of the lens.

I have just searched back through our 30 years working together and there is his ‘credit’ on just about everything, but few photos.

Together we dodged land mines and bandits in Yemen, crocodiles in The Gambia and the Gendarmerie in Paris.

In Africa we travelled by dugout canoe and blithely took the door of a light plane, precariously achieving dizzying shots of the endless Sahara and savannah. Robert was fearless.

Most recently we dodged skateboards and a Royal Princess at Adrenaline Alley. Robert also hosted a workshop at the first ‘Corby Big Film Week’.

Nine international awards in London, Chicago, New York and Rome. A BAFTA nomination, a ‘Gold Camera’ and a Prix de Roma. All with Robert.

Robert was much more than a ‘camera person’. He loved ‘light’. In his work with Julian Bream or Mandy Young MBE – he searched constantly to show his subjects in the best light and to also bring out something of their inner light. He succeeded.

I only now realise that Robert was at my side during some of the greatest moments of my life. Sharing time with Yehudi Menuhin, Michael Parkinson, Stephane Grappelli, Nigel Kennedy, John Renbourn, Lord Lew Grade and Julian Bream. Presidents and Princesses…. and many more.

This picture [above] shows Robert at his happiest. Though we often disagreed, that friendly ‘competition’ occasionally created a kind of magic. I am lost.