WHAT TO DO IF YOU SEE A STRANDED SEAL
Recently there have been a few sightings of seals alone on our local beaches and coastlines. So I got in touch with Claire Arkle who is a volunteer at British Divers Marine Life Rescue (BDMLR).They have a website and a facbook page.

Claire has been a member of BDMLR for 6 years. It started for her when she found a seal pup on the beach and didn’t know what to do. She was very interested in what BDMLR did when they came to help and she sighed up for a course.
BDMLR is a charity, and anyone over 18 years can volunteer to join and they have vets on call to help them if the seals are badly injured. 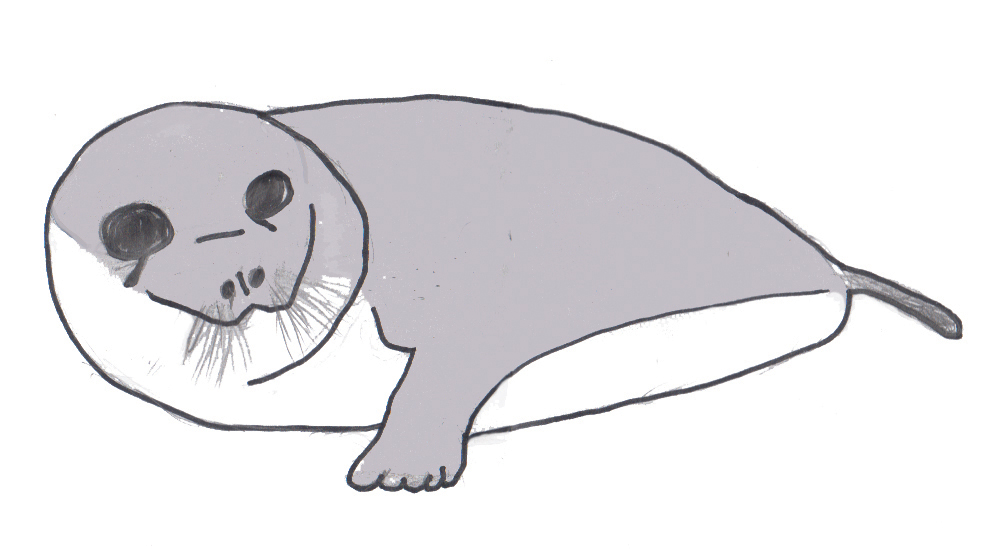 If a seal is injured the medic on-call will assess the seals appearance, eyes, mouth, skin/fur, size, injuries and take photos. If the seal needs further medical attention it will be uplifted and taken to the local vets for treatment and overnight observation. If they are of suitable weight and respond to treatment they are released the next day. If they need further help then they will go to the Blue Reef Aquarium in Tynemouth who help the BDMLR in their recovery.

Sometimes the seals are ok and JUST NEED TO REST until the next high tide; they can be relocated if the beach is busy as they NEED TO BE LEFT IN PEACE.

Claire told me that call-outs increase around pupping season; Common seals around June and Greys around November.Bad weather can also make seals come ashore. They can get very exhausted whilst being in the heavy sea along with illness and injury.
I asked Claire what is the main cause of injury to seals. She said, “With the little ones it’s more underweight or exhausted or perhaps both. Once ashore they get hurt by dogs coming to them. Also they have their own diseases: lung worm, mouth problems, temperature, infections, lack of food and dehydration.”

So – what should we do if we see a stranded seal?

As soon as you see a stranded Seal you need to call BDMLR on 01825 765 546. DO NOT GO NEAR IT OR TRY TO CHASE IT BACK INTO THE WATER. You should warn people about the seal especially people with dogs. If you have dogs keep them on leads.

I wondered how has Covid affected BDMLR
Claire told me they were restricted to travel; their call-outs had to be carefully decided upon, as the safety of the medics came first. Up-lifts where they take seals to further care is generally done in pairs, as seals are heavy to carry, and people weren’t allowed to mix, or travel, in case of accidents. They didn’t want medics getting injured and to put further strain on the NHS. So it is carefully decided whether to send medics out or not. Also not a lot of vets were open so there was nowhere to treat the seals.

Thanks to Claire for talking to me and remember if you see any stranded seals call BDMLR at 01825765546 or look them up on their website or face book page.
PLEASE PUT THE NUMBER IN YOUR PHONE #HELPTHESEALS

by Megan. Image by Bethany

Before March, Parkrun (the 5k run event held on Saturdays all over the world) was a huge part of my life. Every Saturday, besides a few, I would go to Druridge Bay, run 5k and spend time with like minded people. But then covid hit and it was torn away.

I kept running through lockdown, and discovered some beautiful new paths just outside my doorstep. It was great to explore new places, but it wasn’t without the nagging feeling that it shouldn’t be like this. Eventually it became habit, and Parkrun was forgotten, along with normalities like school.

But then everything started opening again and things returned to normal- or at least the ‘new normal’- I started school in September, went out for celebratory meals and could meet up with my friends again.

There was even a point when Parkrun announced they were opening back up for socially distanced events, but, with new rules in place as cases rose, this was shut down and instead they continued their ‘virtual parkrun’ (run 5k at home, and upload it to the website).

I don’t know when they’ll be able to restart, I doubt it’ll be before the year is over. Whenever it is, I know so many people who’ll be excited to start again, and feel more inspired to run again.

Lunar water is just a more scientific way of saying moon water (It also sounds better). Scientists found out there once was water on the moon, and if there wasn’t I wouldn’t be writing this. So if there was moon water, or Lunar water, that means there could have been life on the moon! Imagine moon fish and moon pandas.

It would be bad if there was moon mice because apparently mice eat cheese so if there were hundreds of starving mice which thought:
‘Hey! This place is made out of cheese so why not eat it?’
‘Sure it sounds nice,’

And then they would eat the moon – and they ate it to its core, which was just a rock and that’s why it looks like what it looks like now. A rock – not just any rock – a space rock.

Neville had never experienced lockdown before, and he never wanted to experience it again. It wasn’t fun only being able to go to the same short walks every day and especially not meeting his friend Ozzy for months. Without many people visiting, he started staring at the fish blowing bubbles, swimming around for hours. Much less fun than having his friends around.

It was snowing, white fluffy flakes falling from the sky. There was a cold chill going through the house, which didn’t make sense since all of the windows and doors were closed. It was Christmas day, and Neville rushed to the living room to see the presents. To his surprise, the door was closed! ‘It’s not like I would rip all the presents apart,’ Neville thought. Just because he’s a dog doesn’t mean he’d tear the wrapping paper.

After some intense minutes of staring at the door, there was a sound of running down stairs. Hannah opened the door, with everyone sprinting in. The Christmas tree was decorated with a giant golden star, and lots of tinsel. There were so many presents! There was new bedding and treats, and later a special Christmas day meal. Best lockdown Christmas ever!

THOUGHTS ON THE US ELECTION

The US presidential election has been happening over the past few months, and on November 7th it was finally announced that Biden won. It may seem insignificant to us in Britain, but the impacts will be felt for years to come.

Personally I support Biden, but only because he was the lesser of two evils. Over the past four years Trump has called black people ‘thugs’, taken away transgender rights, appointed Supreme Court judge Amy Coney Barrett (who is against abortion and gay marriage), not to mention the numerous rape allegations and more.

Biden may not be perfect, but he has better principles and can do more for minorities.

Additionally, he has the first female vice president in American history! It’s so exciting to have Kamala Harris representing, and is definitely a step in the right direction. I think it’s high time someone young and up to date took to politics, instead of these old white men who don’t fully understand what today’s world needs.

Trump’s views were that of a traditionalist and someone who only thinks for themself, as well as one who has not been exposed to the current world. Climate change has been increasingly getting worse but Trump continued to ignore it, saying “I don’t think science knows, actually”. Science does know, but ignorance is always bliss.

With Biden in office, he wants to U turn on climate policies (which will help globally) and support minorities by taxing the rich more. Lots of people are against this, but I think if you make more money you should give more back.

Schools opened back up to all years in September, but not everything is back to normal. Food lessons are one element of JCSC school life that have been impacted by the new restrictions. The social distancing guidelines mean that cooking lessons can’t go ahead as usual in the classrooms, so many students are missing out on one of the most hands-on and fun elements of this subject.

However, JCSC food teacher, Mr Shiel, is determined to make sure that everyone still gets a chance to cook. Student’s in year 7 and 8 were set homework to cook a variety of dishes at home, with special prizes for the winning  dishes judged by staff in the food department, looking at ingredients, presentation and creativity.

Some of Amble and Warkworth’s cafes and restaurants including Coquet Tea Rooms, Masons Arms, 1911, Jaspers, Spurreli, The Harbour Fish Bar, Jackdaw Restaurant, Bertram’s and The Sand Bar have donated prizes, all food related to continue to inspire an interest in cooking and food.

“I hoped that this competition would be fun for the parents as well as the children. Cooking together can really bring everyone together and trying the food together may inspire students to keep some of the recipes to make again.”

He also said that cooking at home gives young people valuable life skills for when they leave school:

“It encourages young people to cook and fall in love with cooking, with the hope that they can involve their parents. They can have an enjoyable experience cooking with, and for, the family as well as trying some meals that they may not have thought of trying before.”

Prizes will be given out over this term and into next year.
By Lily