When football really did come home

The best thing about “Football’s Coming Home” as an idea, this year…is that it did already. It’s progression. Great concepts, like taking the knee, were based around safeguarding the players. And there by extension, our own, ourselves. Some members of our squad outplayed and forced policy, in place of its own Government, for the better of the country, and were enabled to do so. 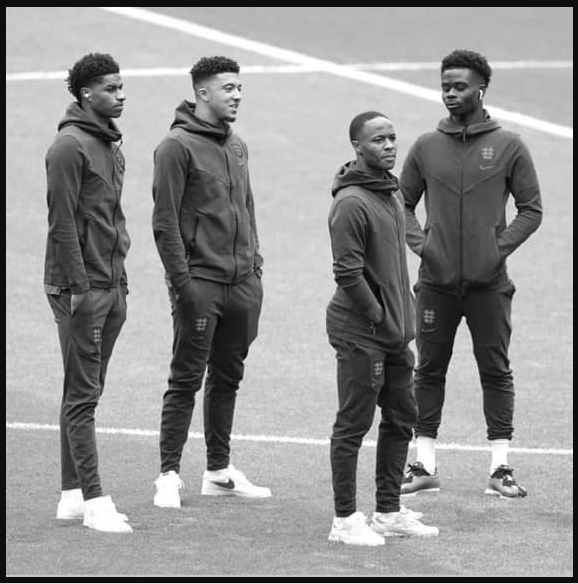 And that’s before the matters of the football pitch. The team did all that it did could so should be celebrated, losing in a UEFA Final that was a year late.

They  represented us with all the breadth of talent, patience, inventiveness and diversity we should embrace and respect, everyday.

Young and free and brilliant. With ideas, backed by conscientious thought and exciting tradecraft; they led a charge before these Euros were even able to be played. It looks like they even cued this whole sense of togetherness by the interventions they made on the pitch; by being allowed to play at elite level for their clubs in a pandemic but also through those more social channels.

Before this tournament even started, we had some incredible heroes: Our NHS. Sir Captain Tom. Our Armed Forces for delivering and testing us all, building hospitals from scratch…and fellows like Marcus Rashford.

After this finals defeat he should never feel low for his contributions. They are myriad. On and off the field. I hope he remembers this. He will.

He, like the team that’s brought so much to us….literally, in some cases, brought more. Real foods and countless hampers. To his Englishmen. Children like him that grew up like him. He is enabling more Marcus Rashfords. I won’t complain. Let’s have more of these eloquent young women and men from that street. They mean the world to this country and will help shape it if given every chance to shine.

So let’s look after them. These footballers. Our Lions.

Yes they earn plenty. They’re footballers. Not just that anymore though. They’re you, me, the guy who’s spent hours drilling on a rig. They’re in your local shop, they’re in a DIY store, they’re serving in the forces. First responders. Best thing is. They are recognisable. They are us. WE played Italy.

Philanthropy of acting on actions and following through, is greater than all the money ever printed. The intelligence and thoughtfulness is evident.

It shouldn’t take Mr. Rashford’s effort to reposition a Government policy that was so clearly lacking. Yet he was there, pushing and asking all the right questions. Reflecting on his own life and feeling the privilegde of his gift. Sterling, with a single mum who fed him from a vending machine for breakfast when she could, his father murdered in Jamaica and is here and knows and recalls, all that came with that care that was rightly given.

All of them have had a real time of it, few were born privileged. And have a talent. And remember those awful days. Yet, seemingly have the mental fortitude to wear it like armour in their endeavours for club and country. Few in this country were born priveldged. This is England. We always look up, often forget the “where from and how”.  We work so hard here.

Intellectually, let’s put our country first. Let’s make that change because those voices, when they’re allowed to be true, should “speak” for their country. The ones that count, the you and I.

This England Team, some for the first time in those in England shirts, might actually be a generation that is finally managed decently by their own country properly. For all they need and wish to contribute to society and be encouraged to do so and find the worth in these things. It grows great women and men.

No matter what. Evidence of great women and men, framed well, might beget a better fairer terrace. The better understanding of source for what’s behind a face, whether on a Premier League pitch or behind you in a shop.

That’s huge. That’s education. What a HUGE conceit, after all these years, that English Footballers, who have been largely vilified for the merest slight or worst blunder ( sometimes rightly so) could wind up our best educators?

As footballers they might actually want to play for their country as opposed to the headlines or live in fear of it. Most of them, might even end up preferring to over the secrecy of past club interelationships for a change, rather than the daunting charge of a sudden gather, hope all that sheer outside will alone and pressure, might be the glue.

Please, let us walk away from “England Expects”

It does not apply.

“England Creates” is a much more confident start.

Above is a photo I’ve found from another source. It’s just a gentle slice of evidence for the Prosecution for the above. It really did, come home.

Well done England. Who’s up for that madness in Qatar next year? I bet these lads are. Bring it on. They deserve every accolade.

Football rebuilt the spirit of this county. They looked after us.

Daniel Gurney
12 July 2021
**This article has been updated by the author and replaces a version posted earlier**
Share this...