I read the County Councillors reports in the last issue of The Ambler with great interest and was quite surprised to find that Councillor Clark had donated a surplus of over £2,000 of taxpayers’ money to two charities. Both charities are very popular and presumably very well supported already so why donate such a large amount where it will make only a little difference. Aren’t there any smaller concerns where £2,000 would make a much greater difference?

If there aren’t any such deserving organisations, then how about spending any future spare funds on the people who helped to provide it namely the residents of the ward who Councillor Clark represents.

The public right of way opposite Priory Park/Tynedale junction with Percy Drive is well used by people with pushchairs, shopping trolleys, parents and toddlers, school children, cyclists and people going to work on Coquet Industrial Estate. Unfortunately, it floods quickly whenever it rains, making it all but impassable. Last winter the melting snow froze turning it into a skating rink and at the moment you just about need to take a machete with you to go shopping at Morrisons.

I expect that £2,000 would not cover the cost of any remedial work needed to make this path passable in all weathers, but it would surely help to improve the present situation.

Other possibilities for spending such a sum of money might be to contribute to the cost of providing a safe crossing point on Percy Drive for the above mentioned residents. A couple of dropped kerbs on opposite sides of Percy Drive would probably be appreciated, particularly by people on mobility scooter.

I am sure that if Councillor Clark consulted the residents in other parts of his ward, he would find that these funds could be spent on a great many other worthwhile projects. 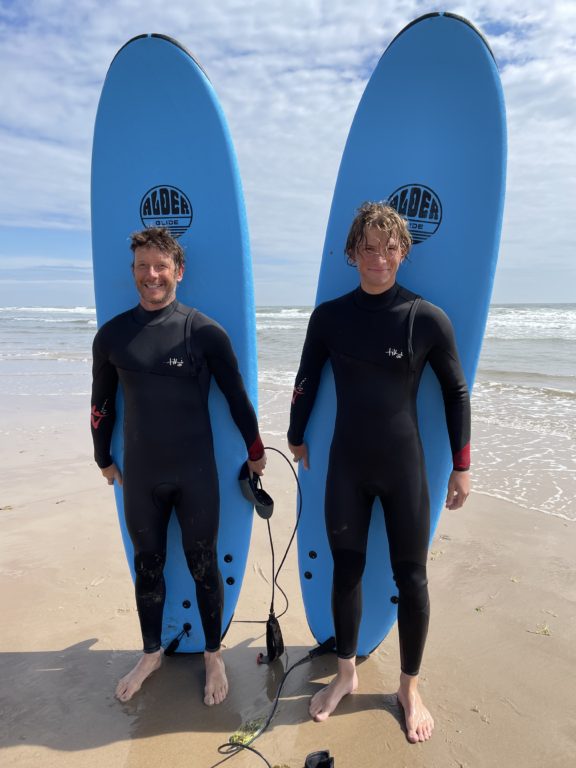 A follow up to your recent piece regarding Northside Surf. (Issue 129, p20)
I was lucky enough to book a surfing session today for my nephew with them. The lesson was brilliant and they were so patient.

The beach at Bamburgh was busy. The instructors were very aware of everything going on around them to make the lesson as fun and safe as possible. This included saving a young girl who started to panic in the sea. They guided her onto the shore, passing her back to her parents with no fuss. When the girl’s mum tried to thank them they actually looked bashful!
True heroes.

I am doing some ancestral research for my family and have come to a bit of a blockage. I was hoping you might be able to help me out a little.

I have found that my great grandad’s (Harold James Graham) father was called Norman William Graham according to his marriage certificate. Norman was working at the Station Hotel in Amble as a Hotel Proprietor around 1939? I was wondering if you had any more information on this or anything more about the hotel.

The reason I ask is that we were told there was possible immigration from Harold and that Harold adopted the Graham surname but we have no record of Harold’s birth anywhere and we can only gain information on his father according to his marriage certificate.
I found the 1939 census where he was registered at the Station Hotel and it says there was a Hannah M Graham living there too but I can’t find any records on either of them.

A wonderful act of kindness
I was amazed today to come across a lady who for both my wife and I has demonstrated the most amazing amount of kindness and compassion to somebody less fortunate.

In a time when mental well-being is uppermost in many peoples thoughts we were waiting at High Street bus station to go over to Warkworth, the Masons Arms being a very engaging and hospitable bar and a must whenever we are here.

The lady in question joined us in the queue and told us how she is currently renting property in Warkworth as she looks to purchase a property before moving from Preston.

On the way to Warkworth the lady told us how she had cycled earlier from her home to Amble, the purpose of this was to handover her £500 bike to a well known gentleman that has fallen on hard times.

This gentleman is well known to many in Amble often seen on Queen Street. People may also be aware of how youths took and vandalised the bike he used to get around on.

Acts like this not only demonstrate a real community spirit but also show the very best in people.
Neil and Joanne Calder, via email

No more swimming lessons in Amble

We are both angry and sad at the decision of Park Leisure to stop all school and private swimming lessons. Our son attended lessons at Amble swimming pool for several years after making little progress at Alnwick. He had just started to gain confidence when Covid struck. Sadly, we are not only back to square one, but are now having to go to Alnwick for lessons again.

Growing up in the 70’s and 80’s in Amble, a local boy drowned. I can still recall that day, as I’m sure many others can. It brought home how important it was for local kids to learn to swim, as many of us couldn’t swim an inch and played by the harbour daily. Many of us were sent for swimming lessons after that incident, supported by the boy’s family. The lucky ones learnt to swim. For others, like myself, large group lessons simply didn’t work and I went through my entire childhood being unable to swim.

When the Amble site was leased to Northumbria Leisure Resorts Ltd in 2002, a part of the long term agreement included a condition that the company build a pool on site which could be used by the whole community. When the pool was built and opened early in 2005, Councillor at that time, Sue Bolam, said

‘We are thrilled that Amble residents now have the swimming pool they have wanted for so long, right on their very doorstep. No one is too young or too old to enjoy this excellent new facility and I hope the local community get many, many years of enjoyment from it. The shallow waters of the learner pool will provide a great opportunity to build the confidence of young children who are learning to swim whilst the larger pool will provide more experienced swimmers with great scope for improvement and enjoyment. It is also planned that local schools will also use the facility for swimming lessons’.

I have no idea what the written agreement was between the company and the Council back in 2002, and I have no idea whether it raises any legal challenges. However, it is quite clear that the agreement has gone sour and Park Leisure are alienating a large part of the community where its business is sited. Many residents already feel that tourists voices have more say than their own. The decision by Park Leisure adds fuel to the fire. Many families will not have the time or money to relocate to Alnwick, and their children will never learn to swim.

I know some of you have written to Park Leisure, and some are still waiting for a response. In the meantime, I have added my signature to the Change.org petition ‘Amble needs a leisure centre’. Well done Karen Simpson for starting it. I hope it highlights the lack of local facilities for children, in particular learning to swim, in a seaside town. There appears to be no lack of facilities in Amble for tourists, so let’s put the residents first for a change.