Duncan Edward Morton was 65 when he passed away in 1981. His life story is a classic schoolboy’s adventure from fairground fighter to a war hero. From the age of 10, the Amble lad known as Duggie was a showman and boxer. At 14 he entered the ring as a professional under the name of Freddie Douglas.

During WW2 he became a sergeant in the Black Watch Regiment and lost a leg at Dunkirk. He was wounded 5 times and shell-shocked twice. He received several decorations including the Military Medal and 5 oak leaves.

After the war, he rejoined his father on the fairground circuit and started training boxers. Winters would be spent in Amble on the old fair site, and in the summer they would tour between Yorkshire and Scotland. 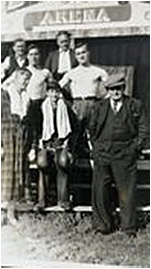 Duncan settled in Amble in 1956 and opened a gift shop and general dealers, the above-mentioned Morton’s Café. Several years later he had to retire because of ill health. He died, leaving his wife, a daughter and grandchildren.

I knew Duncan and his wife Lizzie as polite, courteous and hard-working shopkeepers. I am proud to have met them both.

Duncan was a fine, decent man and a true war hero. His life story is worthy of any film/documentary or book. His story could be straight out of a Catherine Cookson novel but with one significant difference: his tale is true.

There is more of Duncan Morton in Tom Curry’s book: Wor Tomis the Polis, which is available from Lumiere Pod in the Harbour Village, or directly from Tom himself. Email him twc34@btinternet.com