‘End of an empire’ as Roland’s butchers closes for good

Shoppers on Queen Street will be sad to see the closure of one of Amble’s oldest family businesses. RC Roland closed their doors at the beginning of January after nearly 120 years in the town. The recent death of Jeff Roland left the fourth generation butcher’s business without a figurehead, so the family sadly decided to close the doors for good. 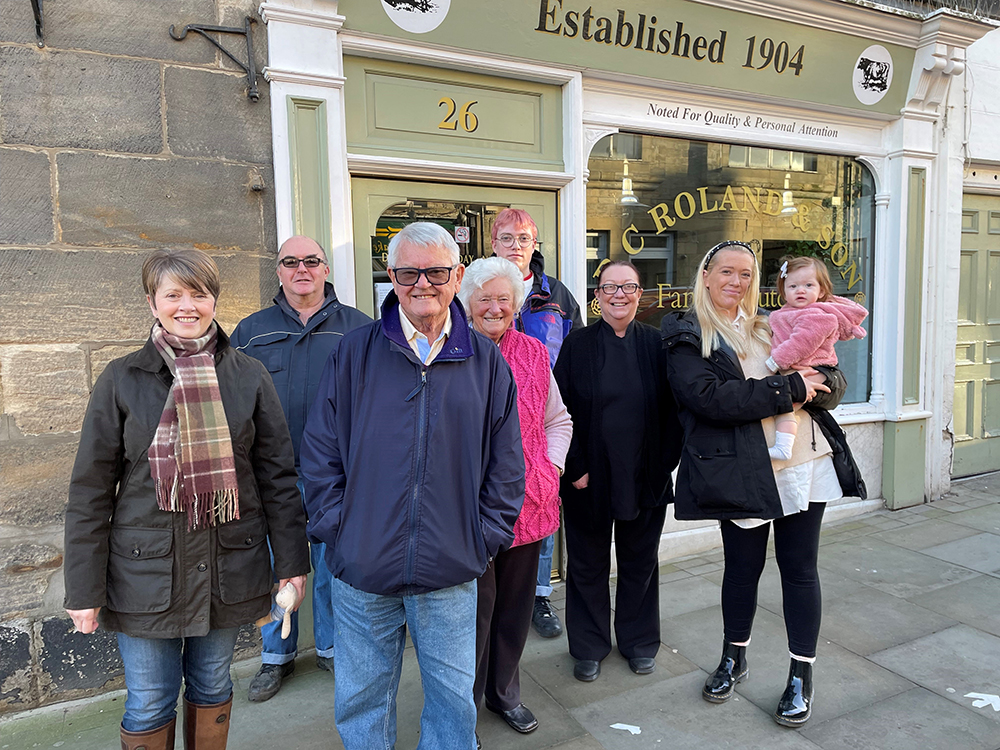 Jeff’s daughter Caitin Roland told the Ambler, “Once my dad was diagnosed as terminally ill, the property was put up for sale, but there had been many conversations beforehand about who will take the business on once my dad was no longer here, and there was no one else to take over. We knew at some point the business would have to go, but we didn’t think it would happen this soon.”

Ted Roland, Jeff’s father, joined the family business in 1952, taking over from his father and grandfather. Jeff started in 1992. Ted summed up his feelings; “The empire’s gone.”

The family said they were overwhelmed and thankful for the number of cards and messages of sympathy.

Caitlin has fond memories of the shop in which she spent so much of her life. “I’ve been here since I was a tiny baby in my pram and now my daughter has done the same.”

Wendy Donaldson, Jeff’s sister told the Ambler “It’s not the same when Jeff’s not there. It’s all I’ve ever known.”

The non-stop work around Christmas time featured large in the family’s memories and a good sense of humour was obviously a necessary part of the job. “Malcolm Barclay who’s worked here for 40 years jokingly says it’s been a life sentence!” said Caitlin.

Memories of Roland’s
The business was founded in Amble in 1904 by Richard Charles Roland. In time they had the Queen Street shop, one in Leazes Street, now the Harbour Guest House and one on the corner of Albert Street, now the vets.

Long-time customer Vivienne Dalgliesh also has vivid memories of the business told to her by her father. “The building in Leazes Street was the slaughter house. When my father was a child, he remembered the ‘bull walloper’ a man called Jack Johnson, who would drive (walk) the beasts from the market in Alnwick to Amble.

The children were warned not to go near the harbour on a Saturday as it could be dangerous if the beasts ran amok, but that was too exciting an occasion for young boys to miss. The slaughter house was closed in 1939 with the outbreak of war and the introduction of rationing.”

Vivienne was sorry to see the closure of the butchers. “There was always a friendly greeting when you entered the shop. As a customer I was very grateful for their service during lockdown, when I was able to order meat over the phone and have it delivered the same day.”