Replying to the response to my original letter (issue 130), I will attempt to clear up any misunderstandings over what I wrote.
I did not criticise Councillor Clark for donating £2,000 of taxpayers’ money to charity. I simply disagreed with his choice of charities, namely the Northumberland Wildlife Trust and the RNLI. Both charities are well established and already have strong fundraising capabilities, as Jill Faulcanbridge illustrates, in the case of the RNLI. In her own letter to the Ambler. The Wildlife Trust, currently running the Big Give appeal also attracts substantial widespread financial support.

I suggested that it would have been better to donate the money to smaller charities within the community where proportionally it would have had a greater effect, such as the Hadston House scheme and the Amble Foodbank, which are both mentioned in the current issue of the Ambler and which contribute greatly to the community.

Failing this, I then suggested that the taxpayers’ money could be spent on projects within the community and I gave, as an example, the still much-needed maintenance to the path linking the Coquet Industrial Estate with Priory Park.
The above thoughts are simply my opinions, to which I happily attach my name, nothing more, nothing less.

Finally, I would like to see the development of a plan of action for all public rights of way in Amble. Please see Anna Williams’ own article on “Transparency needed…” in the current issue (Issue 132).

Are the council putting your life at risk?

There is an optical illusion in Gloster Park that has gone unnoticed since its construction in the 90s.
The estate was built adjacent to a public right of way that runs along the north side of the estate. It has a culverted stream to one side and a retaining wall with a fence on top. This structure should actually be a 6ft fence, as specified in the planning application 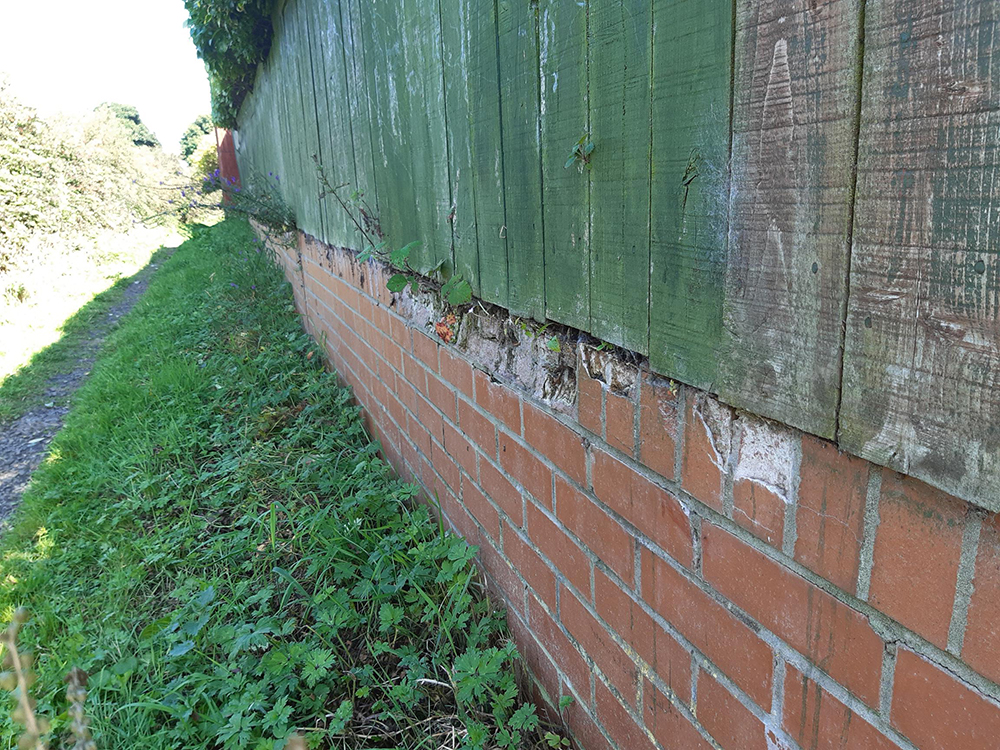 The retaining wall that was built does not meet any standards; it is actually not even built high enough. The bottom 30cm of the fence is retaining the land that the wall should retain. Over the years the weight of this 30cm of land has compressed and spread forcing the fence slowly outwards, soon to fall onto the footpath.

There has already been a failure in the fence due to pressure. In this section new foundations had to be built as the original construction was so poor. The entire fence was constructed in the same way, but no one thought to investigate further.

In July 2020, I reported this problem to building control as a dangerous structure; I also reported it as a breach of planning permission. I have requested the closure of the public right of way as the fence could fall onto the footpath and injure someone.

The council have a duty of care to protect the public. Why are the council not protecting those who use this footpath daily? If you use this footpath, you are putting yourself at risk. The retaining wall was built to artificially raise the level of the gardens, but it is not built to standards
The highways agency would condemn this structure.

(This has been edited.)

I agree 100% with The Ambler’s plea in the Christmas 2021 issue to get the Coble Quay footpath open again.

However, it all follows a depressingly familiar blocked footpath tradition for Amble. We’ve already had a brand new blocked path built for Coquet Grange estate (as covered in previous Amblers) and last year Morrisons opened next to an existing footpath that would provide great offroad pedestrian access from countless Amble houses, but left the 2m high steel fence blocking it off as the attached photo shows. 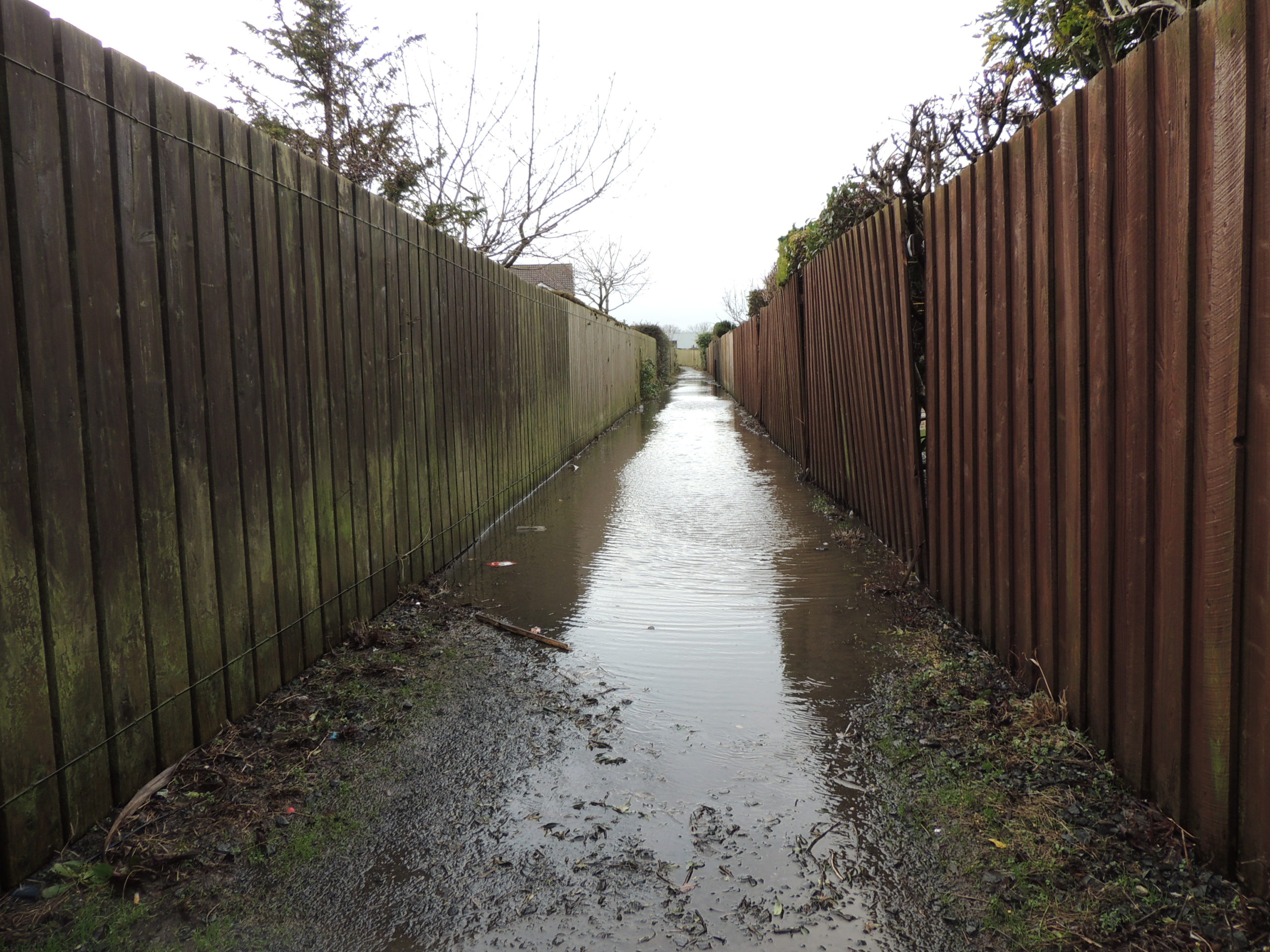 Instead the path acts as a drainage ditch, much the same as the connecting path Hugh Tindle complains about in the same issue. Aren’t the Council supposed to be encouraging pedestrian journeys?

Once the 250+ houses are built at Hauxley Grange, scores more kids could be walking to school along these paths if they were connected, surfaced and drained correctly – instead I suspect they’ll continue to have the traditional Amble choice of mud or traffic.

Is it any wonder the official England Coast Path still grinds to a halt at Amble?

I was born in 23, Church Street in 1942. Lived there with Granma, Mam and Aunty plus cousin. It was rented from the shop in Queen Street that backed onto it and we could not access the top floor! It had a large kitchen to the rear, outside loo and a communal laundry! There were two small apartments at the rear of the yard. I now see that the house is a charity shop.
Mam married in 1948 and we moved to Shilbottle (stepdad was a miner!) into a new council house. Every Friday evening I was sent down to Amble to stay with gran in Church Street. Mam and Dad came down on Saturday to get the weeks shopping (rationing made few shopping baskets!!), so I never lost contact with my pals. Still in touch with two! I have been back a couple of times and found the place somewhat confusing at first! I have many happy memories of growing up in Amble! We all (including Granma) moved to the midlands in 1954 but always came back to Amble for the miners holidays!! Happy days!

Thank you to all who responded to the article on our journey into alternative heating system in the last Ambler (#131 p7). I would add that our decision process was far longer and involved many considerations than were reflected in a short article.
Some of the information posted about alternative fuel sources was interesting and we were not aware of these options.
I reiterate my closing comments that there is no provision or independent objective guidance to help home owners to decide what is best and most practical for your house and circumstances.