Grace by Mark Batey: A review 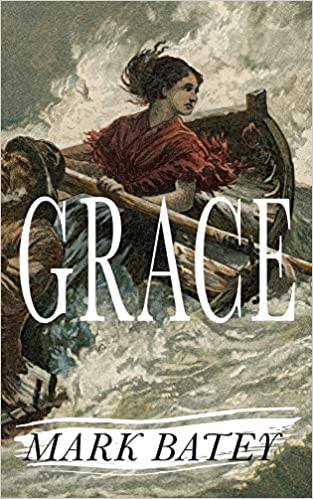 In Grace, Amble author Mark Batey wishes to explore how instant fame affected Grace Darling. In order to do this, of course, we need to look at Grace’s life and background and the place where she lives.

Mark goes into the background very thoroughly. He starts with the geology of Northumberland and its seabed. We need to understand how dangerous the dolerite of the Farne Islands is.

In the lighthouse, Grace seems to live an idyllic life, William playing the violin up and down the stairs and Grace lighting the lamps. There is much love and laughter.

When the Forfarshire sets off, there is worry about the engines, and sure enough they start rattling and banging and water is all over the floor in the corridors and cabins. They had to put sails up, but even that makes no difference. The wind blows the ship around and it is heading for the treacherous Outer Farnes, when Grace spots it from the lighthouse. Survivors and bodies have to be rescued so Grace goes out in a coble with her father William. Many books on Grace Darling would end here but for Mark this is just the beginning. Saving lives was just part of everyday life for Grace and her father, but in 1838 it was unheard of for young women (Grace was 22) to perform heroic acts, or to perform any acts at all.

Complete strangers write to ask for a lock of her hair, an autograph or a picture. Artists and sculptors turn up on the island to paint her portrait or make a sculpture. A circus owner, Batty, wants Grace to appear to bring in the crowds. She is, by now, a freak. It is not long before Grace is brought to the attention of the Duke of Northumberland and Queen Victoria. The Duke proves to be a good friend and mentor and takes charge of the increasing amounts of money coming in for Grace. Grace never took any money out for herself. Much of it was used to improve maritime safety.

Grace continues to be hounded by the Press and we are reminded of Princess Diana suffering the same predicament. Unsurprisingly Grace becomes ill, with symptoms very similar to Covid, and she dies of TB (or Consumption as it was called then). You feel that the cold and the water and the stress and the anxiety all contributed to her death. Just as, with Diana, we were never quite sure who or what killed her, it is the same with Grace. She didn’t want the fame that was thrust upon her and somehow it was the fame that killed her.

The book is well-researched, informative, exciting and complete. It is available online and from good bookshops from 25 January. Use local independent bookstores where you can.