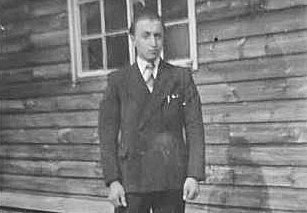 DO YOU REMEMEMBER MY UKRAINIAN UNCLE?

This photo is of my Ukrainian uncle, Yaroslaw Zahorodnyj, later re-named by Amble as Johnny. It was taken in Amble in the 40/50s. He met my auntie Sally during the WWII years when he was a prisoner of war and Sally was a land army girl. For those who don’t know, many Ukrainians were conscripted/forced into the German army under threat of death to fight for Germany. After the war, the couple married and started their family of 4 children and lived during the 50/60s at 27, High St. near the top of The Wynd.  They lived in the ground floor flat and the O’Keefe’s (Vivian) lived upstairs.

How sad that Johnny never saw his Ukrainian family or visited his home country ever again, always fearing reprisals from the war years. He and Sally raised a lovely family and he began work as a coal miner. He soon became a popular and respected Amble community member. No one seemed to ever mention Johnny without adding, ‘What a bloody grafter!’ He had one of the
best-kept allotments and became a champion prize-winning leek grower… He was a passionate family man and a fabulous provider.

I hope you have enjoyed hearing Johnny’s story and I wonder if he is remembered. My autobiography, ‘Wor Tomis The Polis’, has had a fantastic reception, especially in NE and Amble in particular. I have decided to donate ALL profits to The Ukraine Appeal.
Tom Curry

(Tom’s book is available from NF Young’s in Queen St. and Lumiere Pod 5 The Harbour and via Tom himself: email him at tomwcurry@gmail.com)

With the number of fences down in Amble because of the storms I was reminded of the needs of one of our most loved creatures – the hedgehog.  With numbers drastically declining it is now at severe risk of extinction. They need “hedgehog highways” as they need to forage quite long distances at night. When you are repairing or putting up your new fence can you please make a 5” square hole at the bottom so they can travel from garden to garden? If you do you may be rewarded with a view of these entertaining animals.

With all the new development there is less open space but we can compensate by looking after our wildlife. With climate change I think we know that unless we look after our planet and the wildlife in it, the planet is not going to look after us. For further tips on helping hogs see the website Hedgehog Street.

In the recent edition of The Ambler, there was an extract from Tom Curry’s book, entitled “The legendary skills of Dr. Robertson”. I was so pleased to read it because it seemed to me that, just after the war, he was attending to most of Amble’s medical needs, from his home in Oswald Street. If anyone should be remembered, it is our old doctor.

It is perhaps typical of him – doing his mini-op on poor Ray in front of the open fire. I have been told of another accident, this time in Hauxley colliery, when the doctor appeared at the coal face in his helmet. In 1949, I was invited to play cricket, in an evening match at Alnwick. During play, I was hit in the face and my jaw was broken. A man took me in his car to Alnwick Infirmary, but after waiting half an hour without anybody seeing me, I walked out and caught the next bus home.

I went straight to Oswald Street and rang the doorbell. Doctor Robertson appeared and I told him, “I’ve been playing cricket and I’ve broken my jaw”.  He said “Right, you’ll need to go to the Dental Hospital in the morning. Wait a minute and I’ll give you a note”. No fuss and no complaints!

I have heard of his remarks about Lucozade before and he must have been an army doctor during the war, because he was reported as having said to one of his patients, “I never saw any fat men in Belsen”. I attended his retirement presentation in the Brown Memorial Hall and I remember he made a very fine speech about Amble and the many characters he’d met. He was noted for his regular visits to the homes of his old patients and it was a shame that he did not enjoy the long retirement that he deserved.

WHAT BECAME OF THE LORD MAYOR’S CAMP?

Please can we learn what became of the inmates of the Lord Mayor’s Camp. They had many friends in Amble, No one saw them leave. Maybe historian Harry McQuillen has information.