Save Our Braid campaign

Opposition to a housing development and access road across the Braid is growing day by day. After a proposal to build 93 dwellings on land at Braid Hill/North Bank was lodged by Northumberland Estates, objections have been flowing in to the county council’s planning website.

A group called Save Our Braid was set up to draw awareness of the plans, which include building a permanent access road alongside the Gut, as well as a construction road behind the houses on Rivergreen. Anger has been voiced that there has been little publicity of the plans and no meaningful public consultation.

The Ambler spoke to Terry Barton, one of the Save Our Braid group. “People don’t know about this development, and even if they do, they can’t object if they don’t have access or skills to use a computer.

“We asked Guy Munden from Northumberland Estates why there hadn’t been a proper public consultation and he said it was because of Covid. But there are no restrictions now. There weren’t even any public notices on lampposts until last Monday and so they extended the date for comments.”

A proposal has been made for access to the development to be off the A1068, through the Rivergreen estate, along a newly constructed road adjacent to the Gut, before it would cross the stream via a culvert, onto the land at Braid Hill (previously earmarked for Tesco). Concern has been voiced at the amount of traffic which would turn off the road near to where there have already been several accidents and at least one fatality. “It they put a road through Rivergreen or the Marina, there will be more accidents,” said Terry.

“The construction road will be bringing lorries with thousands of tonnes of hardcore turning into the Marina road entrance then turning again behind Rivergreen houses and this is alongside all the other traffic and campervans using the car park, canoe club and recycle bins, I think it’s disgusting. It’s going to cause chaos and destruction.” 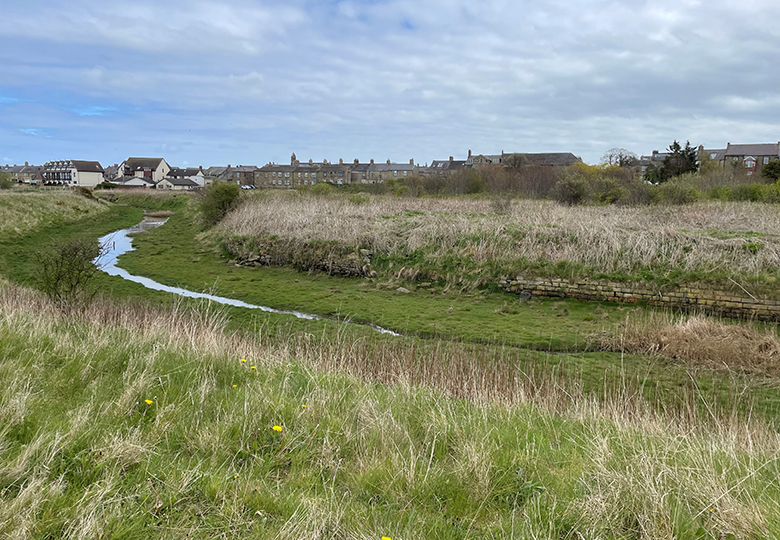 The 93 dwelling development by Northumberland Estates is proposed on land previously owned by Tesco. A road would be created on the Braid side of the Gut

The group say they have been inundated with emails of support for the group. “There are people who support this development, but the vast majority of comments agree with us. It should stay as a green space. It’s one of the few green spaces left in Amble and enough houses have been built here already.

But some residents disagree: One commented: “Good to see some decent housing provision for our local older generation – long overdue. Nice to know that there are still good people with common sense who care for others needs. More than enough land to build and more left for dog toilet which seems to be why others oppose.”

You can see the plans and add your comments via Northumberland County Council’s planning site, ref: 22/01051/FUL

Contact the Save Our Braid group via email: saveourbraid@gmail.com

One thought on "Save Our Braid campaign"