Carole’s flag is the winner

Congratulations to Carole Hardman, whose design for a flag for Amble was chosen as the winner in a recent competition held as part of the Queen’s Platinum Jubilee. 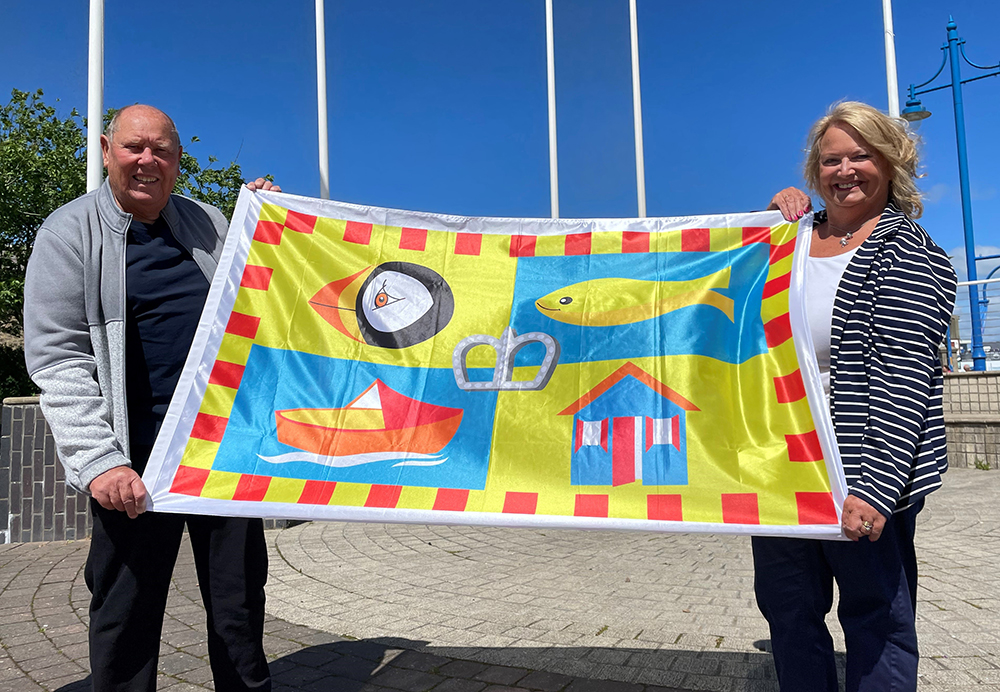 Carole Hardman and her husband Roger with the new Amble flag

In March, Amble Development Trust announced the competition to design a flag to be flown in the amphitheatre in the Town Square.

Andrew Gooding from Amble Development Trust said “There are a number of flagpoles in the Town Square and we have been gathering various flags to fly throughout the year to mark events. Her Majesty The Queen will become the first British Monarch to celebrate a Platinum Jubilee, with seventy years on the throne in 2022. We think it’s an occasion where flags should be flown. However, we don’t have a flag that celebrates Amble and we want to change that!”

The winning entry was from Carole, who combined a puffin, fish, coble and beach hut surrounded by Northumbrian flag-inspired red and yellow squares.

Carole told The Ambler, “I was in Mallorca on holiday when I saw the post [about the competition] on Facebook. It was a rainy day so I thought I’d give it a try, but I’ve never entered a design competition before. I couldn’t just choose one thing that Amble was famous for so I chose four!

“Also I wanted to show we are part of fabulous Northumberland, so I added the border and also put a crown in the middle to celebrate the Queen’s Jubilee.”

The judges said “We chose the winning entry because it was bright and colourful, captured the spirit of Amble and fulfilled the design brief in referencing the Platinum Jubilee. The colours that have been used also reflect the greater Northumberland.”

Carole returned to Amble at the end of May in time to see her design having been recreated into a full size flag. “I’m really chuffed,” she said when seeing the flag for the first time. “The colours are so vibrant. I think it will look really good when it’s up.”

The flag will be flown in the Town Square during the Jubilee and Puffin Festival weekend. A copy will also be sent to Her Majesty the Queen.

“I’ve only dabbled with art so I was absolutely gobsmacked and so proud when I was notified my flag was the one chosen,” she said.
Anna Williams