Why it’s ‘not possible’ to cancel planning permission

In response to Issue #134 Page7 Amble set for over 1100 more houses than Local Plan says we need:
Housing numbers for towns in Northumberland have never been a requirement, and there has been no means of preventing properly made applications for housing in excess of suggested numbers.
If there was no demand and houses did not sell, then one would imagine developers would not build them.
The new local plan should enable the planners to exert more control than they had before, the application for the houses on the North Bank of the Braid will be subject to the new plan and has not been approved yet.
It simply is not possible to cancel planning permission already given to developers.
Current developments have to have 15% of the houses built as affordable homes and in the case of the development at Longstone Manor; it’s much higher at approximately 40%.
Infrastructure plans are underway with car parking and school improvements coming.
The reference to 20% holiday home figure in Trust Life is of course correct but we have no figures that supports that this has been exceeded nor in my opinion will we get them. Although a few of the recently built homes are second homes the vast majority are not, and this makes the 20% figure less probable. The holiday homes are mainly clustered around the harbour.
There is no legislation, and I would not think it is ever likely that rules would ever prevent owners of properties converting or selling existing homes as holiday lets.
There are many new homes in Amble that people who are now residents enjoy and make a significant contribution to the town and its economy. If it was not for them then I doubt we would have our new supermarket and hotel and the vibrant café /restaurant life that employs so many people and is so essential to the continued prosperity of the town.
Amble is a different place to what it was, its reliance on coal has gone and unfortunately, fishing has declined as an employer, it is now finding a new role with industrial companies and a destination point for tourism and its associated facilities.
I have noticed that increasingly it is becoming attractive to retired people wishing to move away from city life.
We say visitors are always welcome at the “Friendliest Port” and I would hate to think that would ever change.

The number of new build homes is out of control. All the arguments about controlling new build have been made but NCC seems hell bent on approving all new planning applications. I have asked Amble Town Council to convene a public meeting attended by Northumberland Council’s Head of Planning to discuss why so many hundreds of housing applications have been passed far in excess of previous projections. If this meeting takes place, I will be proposing a resolution to put a complete stop to processing ANY new planning applications here unless they are for much needed social housing. For example proposed luxury flats by the harbour will create problems such as noise, safety issues, and heavy vehicles right in the town centre which will prejudice Amble as a holiday destination.
Now onto the major problem of second homes and landlords choosing to let their properties for holiday lets, rather than for low-income local families. Such houses are empty for much of the year, destroying the character of our town.
Owners of such properties don’t pay council tax but still get, and expect, council facilities and services. Low-income families are priced out of renting or buying a home having to move in with their parents or living on trailer parks.
Any sense of neighbourhood is destroyed, as well as the impact of holiday homes on residential estates. The governments is belatedly addressing these issues. I would like to see all second homes registered for council tax and owners charged two or three times the requisite amount. I can only conclude second home buyers are thoughtless and selfish and have no understanding of the impact of their second homes on small towns like Amble. Maybe if mortgage rates continue to rise and inflation increases still further holiday homeowners might have difficulty in paying their existing mortgages let alone hoovering up local houses as holiday homes. I hope so.

I often walk by Amble Paddlers and never see small children playing on the stone water feature. It looks in disrepair as the water pump is missing components and no water runs down the channels.
I have taken my small grandchildren there but it is not a safe place to play and I have to constantly hold their hands on the uneven surfaces.
Does any other local person think it is a total waste of money, serves no function whatsoever and the area would be better served by replacing it with a water splash park like those in Ashington, Blyth and Morpeth?
I am sure if there were a safe splash water park more local families and holidaymakers with younger children would frequently use it.
A lifelong Amble resident
via email

I just found your Facebook link to Mauretania day! We were fortunate to be staying in Amble during Mauritania day in 2019 and as an artist I was later inspired to create a collage from postage stamps! This was finally completed during the pandemic lockdown! 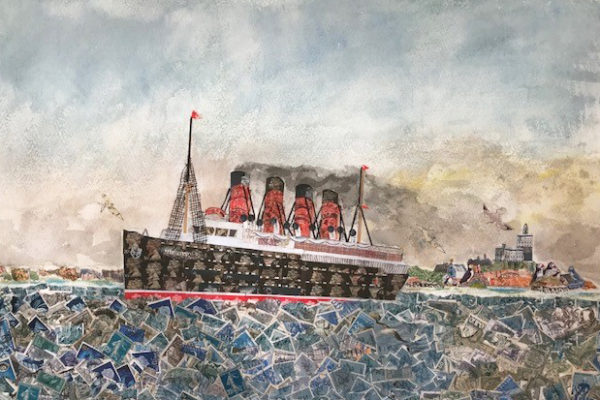 You can see the Mauretania on my website www.rachelmarkwick.co.uk On the Ships page! I hope you like it. Coquet Island and the puffins are featured too!
We loved Amble and we certainly found the town very friendly and welcoming!
Rachel Markwick
via email

June has been quite a disastrous month for nature in Amble. First of all Morrisons wild flower meadows next to their car park, have for the second year running been mown just as several species were starting to flower. Viper’s Bugloss, Red Campion, Ragged Robin, Great Burnet and Red Clover were mown out of existence leaving a few patches of White Clover. A small colony of Scarlet Pimpernel on the edge of the car park were sprayed with herbicide and have now disappeared. 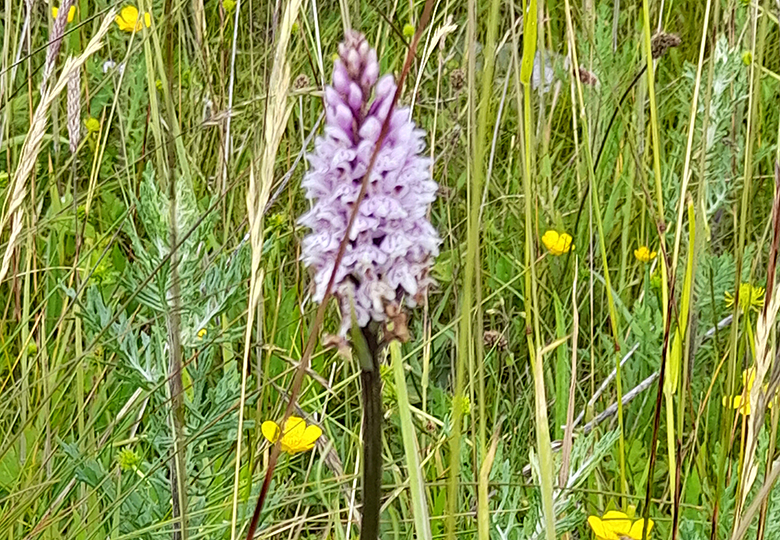 Later a private firm of tree surgeons removed a grove of nine perfectly healthy whitebeams next to Unit 16A on the Coquet Industrial Estate. These trees provided berries and roosts for a good number of birds. Why were they destroyed so needlessly?
It is quite ironic that while a sculpture trail dedicated to birds is about to be installed on the coast perfectly good habitat for birds and insects is being destroyed elsewhere in Amble.
On the plus side, I recently discovered a small colony of orchids also on the industrial estate but am now concerned that these too might soon be wiped out.

I am writing to ask if you could publish this letter as Homes for Northumberland (HFN) are letting its tenants down.
A neighbour who lives in a private house has cut a gate in their boundary fence so they can go through the grassed area in front of our front door.
I would call it our garden, as would everyone who lives in a council house. However, HFN said: it is communal land, free for all to use. So if you have the council cut your grass, even if it’s fenced off with a gate and a path outside its still communal land.

Ed: The above letter has been edited. The Ambler contacted Northumberland County Council for clarification of the land use. A spokesperson said:

“On Philip Drive there is a communal grassed area to the front and the rear of the bungalows which the council owns and maintains. The land does not belong to the bungalows.
Many years ago a gate was put into the perimeter fence which surrounds an adjacent private property. The council does not own the fence, or the gate and as no authority over it
The neighbour occasionally uses the gate for access through to Philip Drive, however after discussions she has agreed to stop using it to prevent any further upset to her neighbour.”

I would like to thank everyone that gave for the Ukraine appeal which included lots of clothing, toiletries, toys, and £780 in cash. We are still collecting and fundraising, so if people would like to continue to help, they are welcome to ring me on 01665 710842.

Mary McNally
On behalf of Amble Churches Together

I travelled up to Amble
Five plus hours on the train

Looking forward to my holiday
And be travelling again

Amble is a lovely place
Lots of things to do
T’was the puffin festival time
So a cruise I did too
North and South along the coast
Made such lovely walks
Picking up some pebbles
Met people, had some talks

Warkworth Castle on my list
So much there to see
Then back to Amble Harbour
To enjoy a lovely tea
The weather was so very good
A joy to walk around
I hope to come back next year
So pleased, I Amble found.