Mapping the world – and beyond 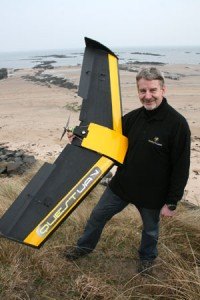 Nigel designs and builds the UAVs

Sleepy old Amble, right? Nothing much goes on here, right? It’s not like we’re home to a Mars exploration research project, or equipment to survey the Antarctic, right? Er – wrong. What started out three years ago as a series of aerial photography surveys for a University has now been developed into a global high-tech business, with clients ranging from universities and research councils to the European Space Agency.

Ex RAF pilot Nigel King has developed a system of taking aerial photographs using an Unmanned Airborne Vehicle (UAV). The photos are then turned into high resolution, fully rotatable 3D maps. These are then used by organisations who require up-to-date, hi-res maps for surveying or research.

Nigel’s company QuestUAV Ltd is producing equipment which will go out with the British Antarctic Survey team later in the year, to help with their research. And the European Space Agency is using his technology to provide test data for their Mars Rover development.

Nigel told The Ambler: “ I use a UAV flying at 400ft with a suitable camera, and I can produce an image of the land in a much higher resolution than, say, Google – by a factor of about 50 – and I can have the results immediately available and unaffected by cloud.”

The UAV flies high over a 1sq km site in a series of sweeps like an aerial lawnmower, taking a series of photographs as it travels. The images are then run through a software program to stitch them together to form a map. The maps can then be turned into a digital elevation (3D) model if required.

Nigel explained how his interest in aerial mapping began. “About 3 years ago I flew a UAV for Northumbria University, which they had bought from a company in Canada. They approached me because of my experience flying both full sized and model aircraft. I saw the limitations of the system and thought to myself ‘I can do better, I can improve on them’.” 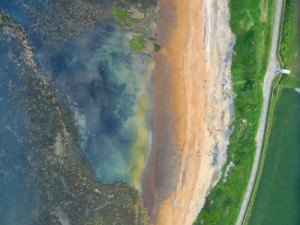 Chemicals in the sea at Lynemouth. Photo by QuestUAV Ltd

Nigel is one of only three people in the UK who is licensed by the Civil Aviation Authority to fly UAVs commercially. He is due to travel to Chile, Bulgaria and Bolivia later in the year with the equipment. He’s even scheduled to appear on the BBC’s Coast programme.

“UAVs have to be operated by someone with experience. The aircraft must fly safely with autopilot equipment. The challenge has been to design an aircraft which can maintain a lawnmower route and keep the height, and can do this all under autopilot technology. I work with an autopilot designer in the UK who has produced this specific functionality for me.

“The aircraft is totally my design. I spent two and a half years working, developing the current systems and gone through 24 aircraft prototypes. I’ve spent about £150k, the manufacturing costs are quite horrendous. But the future is bright, and I’ve got a unique system which has been designed, developed and is manufactured here in Amble.”

For more info on QuestUAV Ltd

5 thoughts on "Mapping the world – and beyond"