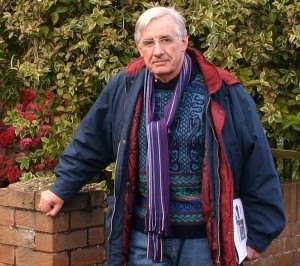 A little while ago I wrote an article suggesting that Amble is home to more than we might think. A few weeks later, someone left a comment at the bottom of the online article, which not only confirmed this, but proved the Friendliest Port has much to be proud of.

I had been lauding the achievements of an Amble based company which builds UAV craft and mapping technology, and which the European Space Agency is using to provide test data for their Mars Rover development. Pretty impressive. I also said “It’s not like we’re home to a Mars exploration research project, ..”.

But then a comment appeared from Fred Taylor. Basically to the effect: been there, done that, got the t shirt. And he has. Well I’m not sure about the t shirt.

We arranged to meet next time he was in the area, and in the meantime he left me a list of the books he had written and a link to his profile pages. And so I read about Professor Fred Taylor, MA, DPhil (BSc Liverpool) Emeritus Fellow; formerly Professorial Fellow, Jesus College and Halley Professor of Physics.

He’s a distinguished Visiting Scientist at NASA’s Jet Propulsion Laboratory in the USA. He is a member of the Cassini Infrared Spectrometer Team now studying Saturn and its moons, and he has published nearly a dozen books on atmospheric physics and the planets in our solar system.

Many of you older readers may well remember Fred’s family. He was born in Lindisfarne Road, his father William (Bill) hailed from a Hauxley fishing family and had been a joiner working for Carse, but was badly injured during the war and for a time the main family breadwinner was Fred’s mother Ena, who was a teacher. His Uncle Maurice ran the Co-op grocery on Queen Street; his cousins, Reg and Jim, are now in Australia.

“We left Amble in 1949 when my mother became headmistress of the school in Howick” explained Fred when we finally did meet up. “I went to the Duke’s School, where I had several classmates from the Amble area. This was the last year before Amble boys went to Morpeth Grammar School instead of Alnwick. I’m still in regular touch with Bob Chapman from Broomhill, whose father Jimmy was a Coal Board manager with an office in Amble, and of course with my Amble cousins down under.”

After The Duke’s school came university. This was the early 1960s, a time of sputniks and satellites, and of course the Beatles. Liverpool University and the city’s swinging music scene caught Fred’s eye. “My friend had gone to Liverpool and I knew the city was very lively” he laughed, “the social life did take sway”. After Liverpool, Fred went to Jesus College Oxford where he gained his doctorate working as Sir John Houghton’s student in the Atmospheric Physics department.

“This was at the time when scientists first started to put instruments into space. Prof Houghton got the Americans to put our instruments up on their satellites. It was a big success and I got my doctorate helping to design and build one of them, for an experimental weather satellite called Nimbus 6. The Americans liked having us along, because they got good equipment at no cost to them.”

After being awarded a Fellowship, in 1970 Fred headed off to NASA’s Jet Propulsion Lab in Pasadena where he and his wife Doris both grew to appreciate the Southern Californian lifestyle. “The plan was to go for a year, but we both liked it. The pay was better; it was a glamorous place to be. Before long I was driving an Aston Martin and Doris a Lotus. I was in charge of my own experiment heading to Venus, so we settled there and ended up staying for ten years.”

And then came project after project, as Fred and his team’s atmospheric and mapping instrumentation was regularly launched into space.  “We’ve been to all the planets. Our instruments have mapped the whole classical solar system; Earth, the Moon, Venus, Mars, Jupiter, Saturn, we’re going to Mercury – our German collaborators are still building that, and we’re also on our way to intercept a comet.”

Returning to Britain was a hard decision, but with Sir John Houghton’s retirement in 1980, Fred returned to Oxford to take over as Head of Department, later becoming Professor Taylor.

“It’s terrifying,” said Fred as he described the processes leading up to the launch of an experiment into space. “All you can think about is, is this going to work? Then there’s the countdown. Mission Control asks you ‘are you ready to go?’ and you have to sign a document to say you are ready. Once in space, they don’t turn the instruments on for the first few days, until the spacecraft has been checked out and is in the right orbit. It’s agony waiting for the first data to arrive – it’s not until then that you know it is all going to be OK.”

Not all the missions carrying Fred’s equipment were successful. “The Observer spacecraft in 1993 got all the way to Mars, but the motor that was supposed to send it into orbit exploded. Then there was Mars Climate Orbiter in 1999; that was the mission when the imperial and metric measurements were mixed up. The numbers were actually very similar – otherwise NASA would have noticed immediately that something was wrong. The result was that when the motor fired to slow the spacecraft down, instead of going into orbit, it slowed too much and ran into the planet and crashed on the surface.”

But it’s not all about the planets. Fred’s work has provided important scientific data and informed views on weather forecasting and possible climate change on the Earth. He was also a strong campaigner for and helped to set up the UK Space Agency.  He sits on one of the agency committees and provides advice to the government. “I had tea at No 10 with Mrs. Thatcher once, when I was there to talk with her advisers about the problem with the ozone layer”.

“I’m an Emeritus Professor these days, which means fewer teaching and administrative duties, so I can concentrate on the things that interest me”.

Currently he is writing his eleventh book, called The Scientific Exploration of Venus, which harks back to his early research with the NASA ‘Pioneer Venus’ mission back in 1978, up to the European ‘Venus Express’ spacecraft which is active there now.

“Space has a big part to play in this country’s future “says Fred. “The UK makes a lot of money by selling technology such as communication and surveillance satellites, forecasting software etc. These days to win funding for science, you really have to  convince people there’s an application for it at the end of the day.”

So next time you catch yourself thinking no-one from Amble will go very far, just look up at the night sky and think of Fred. And he does have the t shirt.