When change hit my life

Last bonfire night, nine-year-old India Drew was hit in the eye by a firework. Here she describes the events of that night and what happened when she was rushed to hospital. 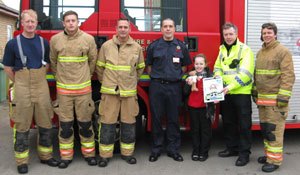 “My accident happened on bonfire night; My next door neighbour asked me if I wanted to watch the fireworks in his back garden. I sat the furthest away to make sure I was safe. It was coming to the last firework being lit when SUDDENLY the firework tipped over, bounced off the fence and flew backwards straight into my eye. Then BOOM I fell straight to the floor.

“My mam came running in as she saw what had happened from the window and she suddenly realised that my eye was burnt and I couldn’t see anything. Within a few minutes my eye was stuck shut and I was bleeding from my eyes and nose.

“When I got to hospital I had to be moved to another hospital where they look after eyes. The doctor who did lots of tests wanted me to stay but I said ‘No.’

“I was very ill all night and for the next few days I had to keep going for lots of tests on my head and eyes as I still couldn’t see. A few days later I had to go for surgery to remove all the bad bits of the eye. I was in hospital for a week.

“I came back to St Cuthbert’s First School in December as I was on the mend. A few weeks later ‘PC Darin’ came into school to talk to me and presented me with a massive glass certificate of bravery in a lovely silver frame and also a lovely fluffy bear called BRAVO! I also got an invite with my class to the firestation as a treat. We had a great time!” 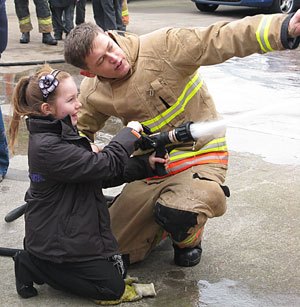 CSO Darin Fawcett said “India has been very brave. When I heard from Carol Jones the Head at St Cuthbert’s First School about India’s accident, we wondered what we could do to lift her spirits.”
With the help of Amble’s firefighters, a trip to the firestation was organised for India and her Year 4 classmates. The children met the fire crew, and saw how the equipment works.

Darin said “I’d like to thank all the Amble firefighters who gave up their time to make it a memorable day for the kids. We gave this bravery award to India for being so courageous when the accident happened and for the future if she needs any further treatment.”

India continues to go for regular checks and has to use a special contact lens in her damaged eye in order to see.

2 thoughts on "When change hit my life"